Cineworld Group says it will open 100 ScreenX locations at its theatres in the next few years. The agreement, which marks a major milestone for both companies, will include installing the multi-projection cinematic system in 10 different countries: U.S., U.K., Israel and seven other European countries. 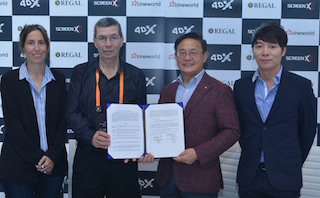 This marks a major expansion for ScreenX, an immersive, 270-degree panoramic film-viewing experience that extends the screen to the auditorium walls, allowing for more creative possibilities. The three-sided theatre format expands feature films to give moviegoers the most immersive experience possible.

Past titles in ScreenX from major Hollywood studios to be released in the premium format include: King Arthur: Legend of the Sword, Pirates of the Caribbean: Dead Men Tell No Tales, Kingsman: The Golden Circle, Black Panther and Rampage. Upcoming releases in the ScreenX format include Ant-Man and the Wasp, The Nun, Aquaman, Shazam! and additional titles to be announced.

“Our relationship with CJ 4DPlex goes beyond accelerating the installation of new 4DX and ScreenX locations around the world, to a shared vision of the future of immersive cinema,” said Mooky Greidinger, CEO of the Cineworld Group. “We are committed to maintaining a premium moviegoing environment at all of our locations in all regions, and the adoption of the most innovative cinema technologies is key to bringing our customers the best experience possible.”

“Cineworld continues to prove that it understands the formula for success as we look to the future of the movies,” said Byung Hwan Choi, CEO of CJ 4DPlex. “We are proud to build on this partnership and very excited to bring a record number of major studio releases to a growing number of ScreenX locations that we know will thrill attendees.”

This partnership signifies a major expansion of the ScreenX franchise. Cineworld has previously partnered with ScreenX’s parent company, CJ 4DPlex, to open up to 145 4DX locations across the U.S and Europe. This new agreement marks an additional increment of 99 screens from the already existing 46 locations spread throughout the U.S. and Europe.