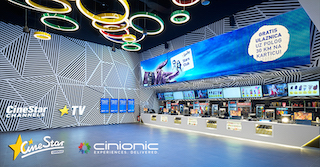 The CineStar Group, which was named UNIC’s International Exhibitor of the Year in 2019, is one of the fastest growing theater circuits in Europe. Sarajevo is CineStar Bosnia and Herzegovina’s sixth location and the largest multiplex theater in the country.

Cinionic was the "clear choice" according to Jadranka Islamović, member of the board and CEO of CineStar Cinema. "Our goal is to provide the most immersive and enjoyable cinema experience for our customers, and Cinionic continues to deliver the support and technology we need," Islamović said. “We’re excited to offer our guests at CineStar Sarajevo theater the exceptional film presentation that 4K Barco laser projection from Cinionic provides."

Providing moviegoers a superior cinema experience is the top priority at the new multiplex. Cinionic has supported CineStar and been the exclusive technology provider for all of the circuit’s theaters in the region for over ten years. The addition of Cinionic projectors in theaters is one in a series of steps CineStar has made in an attempt to engage and reignite the rich film history and influence in Sarajevo.

"CineStar’s focus on technology and innovation ensures audiences in Bosnia and Herzegovina have access to state-of-the-art cinema for years to come,” said Wm Buyens, CEO, Cinionic. “At Cinionic, we continue to invest in the leading laser solutions that elevate the moviegoing experience. We are proud to stand alongside long-term partners like CineStar as we work to power the next-generation of cinema.”

The CineStar announcement marks the most recent step in the expansion of Cinionic's laser projection footprint. In 2019, Cinionic reached a new milestone in projection technology with the release of their family of Barco Series 4 laser projection solutions. Then in 2020, Cinionic expanded the line with the release of an extended range of models, including the SP2K for smaller screens. The Series 4 has been well-received by the industry for vivid colors, high uniformity, and Barco’s patented Active Image Management.