On January 28, NASA, the Houston Cinema Arts Society, and Space Center Houston will host a screening of films by finalists and winners of the 2022 CineSpace international short film competition. 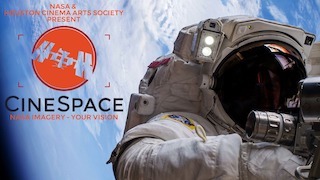 With 169 films initially submitted from 38 different countries, the screening of selected films will be at Space Center Houston, the official visitor center for NASA's Johnson Space Center.

Two new special categories were added for 2022: best educational film that inspires the next generation to join the STEM workforce, and film that best depicts unity and inclusion. The competition winners for the 2022 season were announced in November.

CineSpace offers filmmakers, editors, and animators around the world a chance to share their works inspired by, and using, actual NASA imagery.  Over the past eight years, CineSpace has offered worldwide creators a shot to develop and bring forward hundreds of space-based films with a minimum of 10 percent of the film using NASA imagery.

This year's finalists were chosen from almost 200 submissions from 45 countries. Winning films are selected by a panel of reviewers, including Academy Award-nominated director Richard Linklater, of School of Rock, Boyhood, Apollo 10 ½, and other films.

Learn more about CineSpace and view the 2022 CineSpace finalist films, as well as past winners and finalists https://www.cinespace.org/