Cines Filmax is adding a new 4DX auditorium to the Gran Via theatre in Barcelona. The deal between Cines Filmax and CJ 4DPlex, the makers of 4DX technology, was finalized last week during CineEurope held in Barcelona. 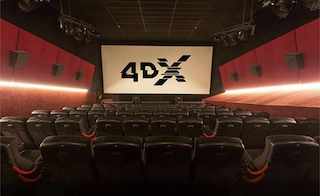 Cines Filmax is part of Cine Acec, one of the pioneer cinema circuits in Spain. The company has been investing in innovative technology for more than 40 years, setting the guidelines for growth in the Spanish cinema industry since its foundation in 1985. 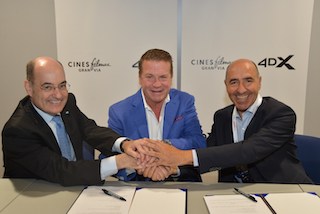 "Our expansion with Cines Filmax shows the continued success and interest in the 4DX experience, said Don Savant, chief business officer, CJ 4DPlex Korea "Cines Filmax Gran Via has been a great partner who understand the value 4DX and ScreenX bring to the overall theatergoing experience."

Each 4DX auditorium incorporates motion-based seating synchronized with more than 21 different effects and optimized by a team of skilled editors. To date, there are more than 783 4DX auditoriums around the world, spanning more than 69 countries.

"We continue to see the demand of the 4DX concept grow in Barcelona and are excited to get the new auditorium up and running," said Jaime Tarraxon, CEO Cines Filmax. "CJ4DPlex has been a great partner and we look forward to continue working together."