As has been widely reported, the owners of the Cinerama Dome, one of Hollywood’s most iconic places, have obtained a liquor license, and are apparently moving one step closer to reopening the theatre and the adjoining 14-screen multiplex. 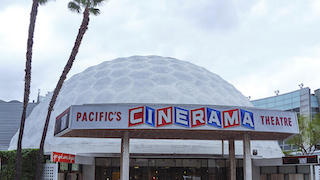 In the wake of the pandemic, the Decurion Corporation, the family business that has owned the Dome since it was built in 1963, shuttered the 17 locations in its Pacific Theatres and ArcLight chains and filed for bankruptcy last year. In the bankruptcy, Decurion held onto the ArcLight Hollywood and the Dome, sparking rumors that the company planned to reopen the theatre at some point.

Last month, the state Department of Alcoholic Beverage Control granted a liquor license, allowing Decurion to operate a restaurant and two bars on the premises. According to the license application, as reported by Variety, the complex will now be known as Cinerama Hollywood.

The application does not disclose when the theatre will reopen but does include schematics showing that the company plans to reopen the Dome as well as all 14 screens of the former ArcLight Hollywood.