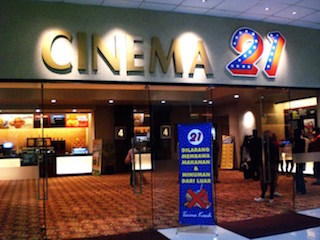 Cinema 21 is one of the first cinema chains in Asia to invest in Christie RealLaser shortly after its launch almost a year ago. With this latest acquisition, Cinema 21 will possess Asia’s largest fleet of Christie cinema projectors equipped with RealLaser illumination technology.

“Having put the Christie CP4325-RGB cinema projector through its paces and being very impressed with its performance, we are convinced that Christie’s RGB pure laser projector is the future of cinema projection and this is exactly what we require to elevate the cinematic visual experience for movie-goers to a whole new level,” said Suryo Suherman, executive chairman, Cinema 21. “This second investment also underscores our confidence in the Christie RealLaser family of cinema projectors, enabling us to stay at the forefront of technology as we continue with our quest to expand our footprint across the country.”

Dale Miller, executive vice president, cinema, Christie said, “Christie is honored that Cinema 21 continues to place its trust in our RGB pure laser cinema projectors, which brings low cost of ownership and unmatched cinematic performance to mainstream auditoriums. This latest acquisition by Cinema 21 is a clear reflection of the value that Christie offers to our customers – by equipping them with the best cinema technologies available on the market, which in turn helps them to generate higher box-office returns.”

Lin Yu, vice president, cinema sales for Asia, Christie added, “We’ve been working with Cinema 21 and its affiliate, PT Megatech Engineering, for more than a decade. I’m glad that our robust relationship has paved the way for the deployment of the best cinema projection technology available today. With this acquisition, Cinema 21 will be able to deliver spectacular cinematic experiences to wider audiences in Indonesia and we’re pleased to be part of this technological and groundbreaking advancement in digital cinema.”