CineLife Entertainment, a division of Spotlight Cinema Networks, in association with CinemaLive, has announced that Northern Ballet's adaptation of Bram Stoker's Classic Horror Story, Dracula will be shown in theatres across the United States through October 31. 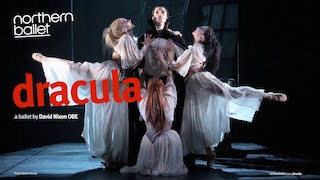 With darkly gothic sets and costumes, Northern Ballet's Dracula is played out through a unique blend of sensuous dancing and gripping theatre. The result is ballet with a dramatic bite. Created by Northern Ballet's Artistic Director David Nixon OBE, with atmospheric music by Alfred Schnittke, Arvo Pärt, Michael Daugherty, and Sergei Rachmaninov, Dracula is a thrilling adaptation that will leave viewers mesmerized.

"The Northern Ballet's rendition of Dracula is a beautiful work of art and we are thrilled to be working with them to share it with the rest of the country,” says CineLife Entertainment executive vice president Bernadette McCabe. “As Halloween quickly approaches, we can't think of a better time to showcase this film."