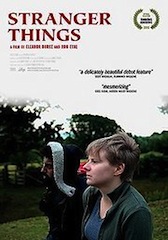 Slamdance is a year-round organization by filmmakers for filmmakers that was founded in 1995 in Park City, Utah. Entering its 20th year, the Slamdance Film Festival has served as the launching pad for many respected filmmakers’ careers, including Christopher Nolan, Marc Forster, Behn Zeitlin, Lynn Shelton, and Jared Hess.

“The partnership between Cinedigm and Slamdance is a natural,” said Erick Opeka, senior vice president, digital, Cinedigm. “Cinedigm is the worldwide leader in digital independent content distribution and Slamdance has always been very innovative and forward-looking on the digital front. We expect to have great success in launching their films on a variety of established and emerging digital platforms.”

The first two films released on June 11th are Stranger Things and Hybrid, while The First Season will launch in September.

Set in a remote village on the south coast of England, Stranger Things tells the story of Oona, a young woman who develops an unusual and touching bond with a streetwise homeless man after returning to her childhood home. A New York Times Critics’ Pick, the film was the winner of the Grand Jury Prize at the 2011 Slamdance Film Festival and the Raindance Film Festival. The film, described by Filmmaker Magazine as “a delicately beautiful debut feature,” stars Adeel Akhtar (Four Lions, The Dictator) and is Eleanor Burke and Ron Eyal’s directorial debut.

Winner of the Truer Than Fiction Award at the 2002 Independent Spirit Awards, Hybrid explores the life of Milford Beeghly, an Iowa farmer who led the charge for hybrid corn during the 1930s. The award-winning documentary is directed by Beeghly’s grandson, Monteith McCollum, and combines interviews, archival footage, original animation and a rare dry wit to create a meditative portrait of the decidedly odd Beeghly. Hybrid is the winner of numerous awards, including the Honorable Mention Award at the 2001 International Documentary Association, the Grand Jury Prize in the documentary category at the 2001 Slamdance Film Festival and the Award for Original Vision at the 2001 Newport International Film Festival.

In an intimate, verite style, The First Season tells the story of Paul and Phyllis van Amburgh who spend their life savings on a dream: starting a small, family farm. With three children, a fourth on the way and their savings depleted, the van Amburghs are forced to confront the risks and challenges of living their dream. The First Season premiered at the 2012 Slamdance film Festival and is Rudd Simmons’s (Producer, Boardwalk Empire) directorial debut.