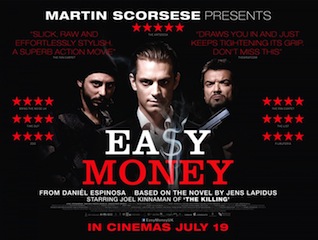 Cinedigm, which acquired Easy Money from distributor TurstNordisk, will distribute the final two films in the trilogy in 2014 across all platforms, including theatrical, digital and physical DVD/BR.

Easy Money: Hard to Kill and Easy Money: Life Deluxe are the second and third installments in the hugely popular Easy Money trilogy, starring Joel Kinnaman (Robocop, 2014) in the leading role. The crime thrillers introduced the Stockholm noir genre to the international audience and became a huge and instant international success when the first film, Easy Money, by Daniel Espinosa, was released in Sweden in 2010.

So far the trilogy has been seen by more than 1.2 million Swedes in the cinema, which makes it one of the biggest local successes of the last decade. Martin Scorsese presented the first installment of the trilogy to U.S. audiences to splendid reviews last year and a remake is currently in development by Warner Bros with Zac Efron attached to star.

“We’re thrilled to bring these two gripping films to audiences in North America,” said Vincent Scordino, senior vice president of theatrical releasing, for Cinedigm. “Joel’s tremendous work in the Easy Money films makes it easy to understand why Hollywood has embraced him, he is a star.”

“These great Scandinavian thrillers have found a perfect home with Cinedigm as the North American distributor and we are very happy about the co-operation”, said Rikke Ennis, CEO at TrustNordisk. “With Cinedigm’s experience and strong distribution channels, we look forward to let their competent team bring these enthralling films to the North American market and attract a large audience.”

Besides the North American deal with Cinedigm, TrustNordisk has so far sold Life Deluxe to more than 35 countries including Netherlands, Belgium and Luxembourg (Lumiere), Switzerland (Frenetic), Korea (Sonamu), Czech Republic/Slovakia (Film Europe) to name a few.

Life Deluxe had its international premiere at Busan International Film Festival early October. TrustNordisk will have market screenings of the film at American Film Market, which kicks off November 6th.