Christie to Unveil Wide Range of Technology at CinemaCon 2017

Among a range of new products to be unveiled at CinemaCon next week in Las Vegas, Christie will be previewing a new Christie Freedom Series direct-coupled RGB laser projector; a pure laser innovation boasting higher efficiency and significantly longer life than hybrid cinema laser phosphor projectors.

Based on the Christie CineLife Series 3 digital cinema electronics platform, the CP4325-RGB laser projector is an easy to install, set-up and operate solution in a compact form factor, with no need for sub-ambient cooling. Providing superior color and vivid contrast, this low maintenance, all-in-one unit is the forerunner of RGB laser projector solutions that are intended for mainstream cinema applications. As such, it will be an ideal choice for retrofitted cinemas, ‘new builds’ and as a replacement product for aging Series 1 and early Series 2 installations. On preview in the Milano 1 room. 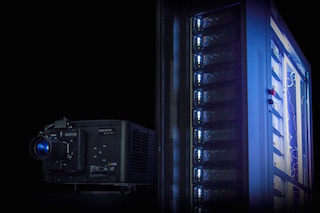 “In keeping with our ability to deliver what cinemas need to grow audience attendance, Christie’s presence at CinemaCon 2017 will be pervasive, from both within and outside the Colosseum at Caesars Palace; along the corridors, archways, registration areas and lounges; as well as Christie’s own futuristic theatre in the Milano 1 room and our solutions at our trade-show booth, 2303A,” said Kathryn Cress, global & corporate marketing VP, Christie.

CinemaCon will also witness the introduction of the CP2308 projector, a Xenon lamp-based unit that meets the needs of smaller exhibitors, who have been eagerly awaiting a DCI-compliant, full-featured yet affordable digital-cinema option. The CP2308 has been engineered with the operator in mind, with emphasis on ease-of-operation and user-friendly features, including built-in automation that provides simplified playback, scheduling, and management of cinema content; a large touch panel controller with a newly UX designed intuitive user interface and expansion card support for additional control.

Xenon-lamp based projectors, including the CP2308, are currently the preferred choice for mainstream cinemas when compared to laser-phosphor cinema offerings, and will be so for years to come, while production of RGB laser projectors swing into high-gear.

Christie will also showcase the CineLife Series 3 electronics, powering the CP2308, the CP4325-RGB and Christie’s entire, expanding line of DCI-compliant projectors, which are manufactured, designed and integrated by the company. Featuring a streamlined UX-inspired interface, Christie CineLife simplifies the playback, scheduling and management of cinema content. Field-tested on more than 100 screens since 2014 with the next-generation Christie IMB, the CineLife Series 3 electronics also provides backwards compatibility with other Series 2 IMB manufacturers.

At the Colosseum, Christie technology will be featured both outside the theatre, inside its lobby and in the auditorium itself.

Christie Boxer projectors and Christie Pandoras Box media processors will be on display on the Colosseum façade displaying featured content from Allure, a Christie company. These digital, easily changed visuals are far superior to the static, hanging banners and fixed artwork that grace most cinemas. Inside the Colosseum lobby, the Hero Wall composed of eight 55-inch Christie LCD panels arranged in a herringbone pattern will form a platform to deliver sophisticated advertisements.

Inside the Colosseum auditorium, the Dolby Vision laser projection system has been temporarily installed to support select studio presentations and screenings. The Dolby Vision laser projection system was co-developed with Christie, which supplies, installs and services all the projector systems. Currently there are more than 300 Dolby Cinema sites installed or committed to across the globe.

Live demonstrations of the newest cinema audio product, the Christie Vive Audio LS series, will be held in Milano 1. In addition, a new Vive Audio SD5 Sigma Delta amplifier will be on display, which boasts enhanced audio performance, simplified system setup and calibration, and most importantly an expansion slot on the front panel that enables installation of optional cards including support for network control and monitoring.

Also in the Milano room, attendees can experience a futuristic cinema lobby and see what is possible from the customer engagement and transaction technology experts at Allure, a Christie company, and Christie Experiential Networks. From innovative POS platforms, engaging digital signage and menu boards to digital box offices, mobile solutions and interactive lobby displays, CinemaCon attendees will be impressed with the variety of customer-focused experiences that Christie offers, and which are proven to influence consumer behavior.

As an enhancement to customers’ remote monitoring subscriptions, YourChristie mobile app keeps Christie’s customers informed of the status of their service cases, anytime, anywhere. The YourChristie app is compatible with iOS and Android devices and will be available spring 2017.