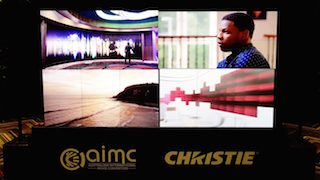 “As a strong supporter of Australian cinema and the leader of cinema technologies, we’re excited to show delegates a preview of Christie’s upcoming CP4325-RGB pure laser cinema projector, which is poised to be a game-changer in terms of its all-in-one enclosure system and high performance capabilities,” said Michael Bosworth, general manager, Christie Australia. “Entirely designed and built at Christie’s world-class research, development and manufacturing facility, the CP4325-RGB will deliver an all-new platform offering an affordable, reliable and performance-driven cinematic experience, developed specifically to meet the needs of mainstream cinemas. In particular, the projector’s compact footprint means that it can be easily integrated into any standard cinema booth.”

Lin Yu, vice president, Christie Asia Pacific, added, “Christie has continued to place strong emphasis on the Australian and New Zealand cinema industry, and I’m pleased to note that the AIMC is the perfect platform to showcase our latest technologies and innovation to the fraternity. The sneak preview of our upcoming CP4325-RGB at this year’s event is a case in point. Intended for mainstream cinema applications, the CP4325-RGB is a game-changing proposition for exhibitors looking at upgrading existing installations, as well as for new-build cinemas and retrofits. I’m confident that the CP4325-RGB will become the benchmark for laser-based cinema and exemplifies Christie’s technological leadership in the cinema market.”

Similar to the fiber-coupled Christie CP42LH RGB pure laser projection system used in premium auditoriums, the CP4325-RGB boasts 4K resolution, offers a wide color gamut exceeding DCI P3, enhanced contrast ratios and high frame rates. Since the projector does not require any external cooling, system complexity and costs are drastically reduced. This translates into an impressive and reliable operational life of more than 30,000 hours, with an 80 percent brightness delivery over this time. The CP4325-RGB also has a contrast ratio of up to 6000:1 and provides better uniformity and a wider color gamut than other cinema projection systems.

Christie is also showing its MicroTiles arranged in a four-by-seven array.