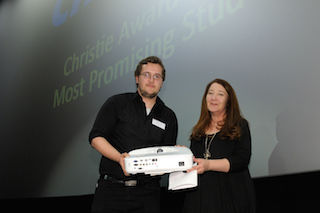 The twelve-year partnership between the National Film and Theatre School and Christie includes sponsoring the NFTS Graduate Awards. This year the Christie Award for Most Promising Student went to producing MA graduate, Andrew Oldbury. Oldbury was presented with a Christie Captiva laser phosphor projector.

Beginning his career working in development on the BBC medical drama Holby City, over the past three years Oldbury has produced several award-winning short films, which have collectively been shown at over 160 film festivals. He is fascinated by how technological advances affect storytelling, particularly virtual reality and augmented reality.

“Andrew has already made his mark in the industry and we are delighted to have been able to be part of his journey. To support this level of talent is one of the privileges of our association with the NFTS. Andrew’s exploration of virtual reality and interest in using technology is something Christie is very involved in and we hope to see more of his next achievements,” said Adil Zerouali, director of Cinema Europe for Christie.

Speaking immediately after the awards presentation, Oldbury said, “Winning this award is a lovely surprise and honour as I didn’t know I was nominated and did not expect it at all! It’s a great way to end my two years here. With VR, I didn’t want to just pick something safe but take technologies and opportunities the school has to offer. I’m grateful to parties like Christie and partners so we can work with people who lead in the industry.”

Chris Auty, NFTS head of producing praised Oldbury warmly, saying: “During his time at NFTS, Andrew has been known for his generosity, persistence and willingness to reach out beyond his area doing stellar work across live fiction as well as projects outside his comfort zone including games and television entertainment. He is certainly a well deserving recipient of this fantastic award from Christie and we wish him success for his future endeavours.”