Christie has announced that the Christie CP2208 digital cinema projector has generated record-breaking sales in China since it started shipping in October. To date, Christie’s partner Beijing Donview Technology Development Co., Ltd (Donview) has purchased more than 500 units of this affordable and DCI-compliant projector, making it the bestselling cinema projector of its class in China to date. 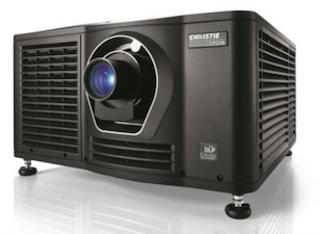 Christie says that this is four times the amount of cinema projectors of the same class sold by a competitor in the Chinese market between October and December 2015. Aimed at theaters whose screen sizes are less than 10.6 meters (35 feet) wide that require an affordable solution in a compact footprint, the CP2208 is the latest in a long line of award-winning Xenon-lamp based Christie Solaria projector solutions. The CP2208 is capable of delivering images at 9,000 lumens within the DCI color space and up to 10,000 lumens when presenting alternative content.

“We are absolutely delighted that the CP2208 has achieved overwhelming sales since it was unveiled during the Beijing International Radio, TV & Film Exhibition in August,” said Jason Pei, sales director, Christie China. “This shows that our latest cinema projector has inspired strong confidence due to its impeccable quality, features and performance. Powered by Xenon illumination, the CP2208 provides superior color reproduction, brightness that is double that of similarly-sized, mercury-lamp based projectors and overall better performance.”

Lin Yu, vice president, Christie Asia Pacific, added, “We’re very pleased and honored that our valued partner Donview has acquired our latest digital cinema offering with confidence. With its years of expertise in R&D, manufacturing, sales and services, I’m confident that Donview will offer our innovative CP2208 digital cinema projector as the best projection solution for exhibitors in terms of reliability, operating costs and upgradability both now and in the future.”