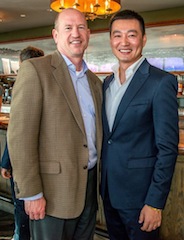 China’s largest movie media group, China Movie Media Group (影时尚 Ying Shishang), announced today it will open its first United States office in Los Angeles, California. In tandem, it will team with its first U.S. studio, Paramount Pictures, to launch the marketing of Transformers: Age of Extinction (TF4) in China, a movie that has incorporated many Chinese elements and locations.

U.S. based Jiaflix and the China Movie Channel (CCTV6), with its new media subsidiary M1095, are the production and promotion partners of the film. China Film Group is the sole import company in China.

“The China film market has maintained a growth of 30 percent each year and has become the world's second biggest box office market,” said Zhang Gen Ming, CEO and founder of CMMG. “The establishment of our new L.A. office is only the beginning of the relationship between the two biggest countries in the rising global film market. In addition, because there were so many Chinese components to TF4 it seemed like a natural and compelling partnership.”

"We are thrilled to be working in partnership with CMMG on the marketing of this next installment in the Transformers franchise. Michael Bay's films have been very popular among Chinese audiences and with CMMG's support, we hope Transformers: Age of Extinction will continue that tradition," said Rob Moore, vice chairman of Paramount Pictures.

To acknowledge their new alliance, executive officers from Paramount Pictures and CMMG held a small celebration in West Hollywood on June 3rd. CMMG is a comprehensive film group that provides a full range of movie services, including production, investment, promotion, Chinese domestic distribution and marketing.

TF4’s Chinese marketing campaign is a collaborative effort between CMMG and Paramount Pictures’ International Marketing Department to manage the organization, planning and execution of its launch in China. CMMG’s long-standing relationships with the top 10 Chinese theatre chains and China’s top social network and online ticket purchasing platform, Tencent’s WeChat will help drive its promotional efforts. Together with Wanda Cinemas, China’s largest cinema chain, CMMG is organizing the premiere of TF4 in Beijing.