Systems integrator and cinema software provider CES+ has renovated and updated the historic Totah Theatre in Farmington, New Mexico with the latest in cinema technology and services. 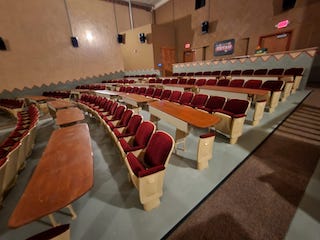 “This is not an everyday theatre as it plays a vital role to the community and its history,” said Alex Younger, CES+ CEO. “We are proud to be a part of its renovation, installing state-of-the-art AV systems while having our technicians on-site to ensure all of the vital components are installed and managed properly from the start.”

CES+ has installed a Barco Series 4 laser projector, a Dolby IMS-3000 server with a CP950 sound processor and 16-channel DMA16302 amplifier, and JBL 7.1 passive audio system including speakers, surrounds and subwoofers. And the auditorium is fully equipped with Dolby hearing impaired devices.

There is also a 28-feet by 15.2-feet retractable screen from Severtson Screens. "We are excited to partner with CES+ for this installation as the Totah Theatre is an historic and unique venue," said Aaron White, Severtson’s home theatre and pro AV sales lead. "Our Giant Electric projection screen is the ideal choice to Totah's auditorium since it can be lowered and retracted at the push of a button, opening up the stage space for other performances and opportunities when not in use."

In 2020, San Juan County acquired, and in partnership with the City of Farmington renovated the facility to create a Center of Film for the region. Upon project completion, the facility will be used for film screenings and live entertainment events and will serve as the base of operations for Totah Studios, a joint venture between the San Juan County and the City of Farmington, who took control of the building last year.

Deemed of historical significance to the city, the structure is being preserved.

“The Totah Theatre holds many fond memories for the community of nights at the movies with family and is a wonderful centerpiece to the newly revitalized downtown district, The Heart of Farmington,” said Warren Unsicker, director of economic development for the City of Farmington.