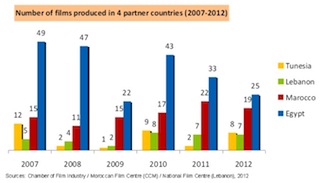 The European Union's Euromed Audiovisual III program and the European Audiovisual Observatory, in collaboration with the Moroccan Film Centre, brought together cinema experts from around the South Mediterranean region in Casablanca on June 20 and 21.These Arab film professionals met representatives of international bodies working on statistics in cinema, and successfully developed recommendations for a permanent South Mediterranean network to ensure systematic collection and exchange of data on the region's film sector.

These recommendations, to be presented to South Mediterranean states, professional organizations and companies, and the European Union, underline the importance of economic transparency and the need for permanent data collection.

"These two days have been a real moment of exchange of data, analyses and proposals. The level of organization for data collection and dissemination on the film sector is very different in each country of the region, but needs are similar and the will to find a common solution is clear" explained André Lange, expert at the European Audiovisual Observatory and advisor to the project. "All experts wished to obtain data on classic indicators on funding, production, distribution, exhibition and other forms of film dissemination, including television, videos, and video-on-demand. More qualitative analyses of the markets were also requested."

The most urgent issue is certainly that of information on the transition to digitization. While the digitization of cinemas in Europe is making significant progress with over 70 percent of cinemas now digital, the process has barely begun in the countries of the region. This is likely to increase the difficulty of the circulation of films between Europe and the Arab countries, which is already low.

During the meeting in Casablanca, participants recognized the leading efforts of the Moroccan Film Centre to provide comprehensive sets of statistics on film production and distribution in the country. The presentation of a project for an Arab Film Database was received with great enthusiasm. Participants also stressed the endemic problem of piracy and the necessity of a comparative study on the modalities of film classification as well as on censorship in Europe and the Arab countries.

A feasibility study to be published at the end of 2013 will make proposals to set up this permanent network of regional experts to continue with data collection in the region.

The Euromed Audiovisual III program has been working on the initiative to collect and publish data on the film industry in the South Mediterranean region in collaboration with the European Audiovisual Observatory since October 2011. So far, the project has produced reports for Morocco, Lebanon, and Egypt. Reports on other countries from the region are expected by the end of the year.

The data collection project is only one of several projects conducted by the Euromed Audiovisual III program, whose aim is to reinforce the film and audiovisual sectors in the South Mediterranean region. The program also focuses on key areas such as training, co-production, production, and distribution, and regularly updates a legal database on copyright laws and coproduction agreements in each of the partner countries.