Fathom Events, Warner Bros., and Turner Classic Movies are bringing back the Academy-Award winning film Cabaret to movie theatres this summer in celebration of the film’s 50th anniversary. 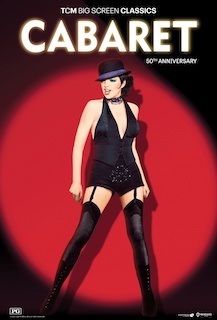 Cabaret debuted in theatres in 1972 and featured choreography by the legendary Bob Fosse, who won the Academy Award for Best Director.

Set in Berlin in 1931, Cabaret follows flamboyant American Sally Bowles (Liza Minnelli), a singer in a cabaret nightclub who falls in love with a British academic Brian Roberts (Michael York).

Matters get complicated when a wealthy and decadent playboy Maximilian von Heune (Helmut Griem) enters the scene, and their love triangle plays out against the rise of the Nazi party and the collapse of the Weimar Republic.

The film will be screened on July 17 and 20 only. Visit the Fathom Events website for a listing of participating theatres and the purchase tickets www.FathomEvents.com.