The men behind Universal Pictures’ new, groundbreaking, R-rated gay romantic comedy Bros are here to save date night. Bros director Nicholas Stoller, along with star and co-screenwriter Billy Eichner and star Luke Macfarlane are bringing some of their favorite movies – Forgetting Sarah Marshall, Trainwreck and Knocked Up – back to theatres each for one night only events September 19, 20 and 21. 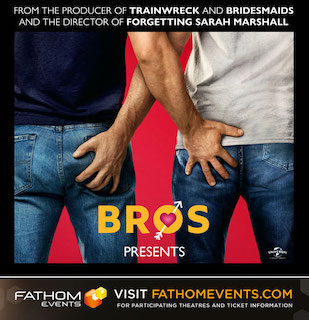 Join them for exclusive screenings on three consecutive nights in select theatres in the Fathom Events network nationwide, with each screening preceded by a unique introduction from Stoller, Eichner or Macfarlane that highlights why the film is one of his favorite romantic comedies.

In Forgetting Sarah Marshall, which is playing on September 19, Peter (Jason Segel) is a struggling musician who finds his world turned upside down when his TV celebrity girlfriend, Sarah Marshall (Kristen Bell), dumps him for a tragically hip rock star (Russell Brand). Directed by Nicholas Stoller from a screenplay by Jason Segel.

In Trainwreck, which is playing on September 20, Amy (Amy Schumer) has been taught that monogamy isn’t realistic. Now a magazine writer, Amy lives by that credo, but when she finds herself starting to fall for the subject of an article she’s writing (Bill Hader), Amy starts to wonder if other grown-ups might be onto something. Directed by Judd Apatow from a screenplay by Amy Schumer.

In Knocked Up, which is playing on September 21, they say that opposites attract. Well, for slacker Ben (Seth Rogen) and career girl Alison (Katherine Heigl), that's certainly the case—at least for one intoxicated evening. Two months and several pregnancy tests later, Ben and Alison go through a hysterically funny, anxious, and heartwarming journey to parenthood. Written and directed by Judd Apatow.