With box office numbers in China returning to pre-pandemic levels and on the heels of a record-breaking Chinese New Year, Broadway Cinema has agreed to add four new Imax theaters across several iconic locations in downtown Shanghai, including One East, located in the heart of Huangpu Riverside, the first flagship property managed and operated by Brookfield Properties in Shanghai. 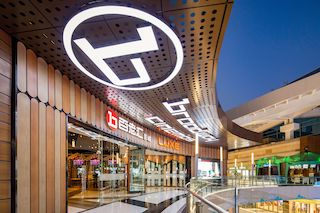 The deal will bring four new Imax laser systems to key commercial locations in one of the country's most successful theatrical markets. It also marks an expansion of the longstanding partnership between IMAX and high-end exhibitor Broadway, which currently includes Imax screens across eight of Broadway's top-performing theaters in China. With the new agreement, Imax's theatre network in China has developed to nearly 1000 total screens, including 248 in backlog.

"Moviegoing has come roaring back post-pandemic in China, offering the world a glimpse of the pent-up consumer demand that awaits multiplexes worldwide," said Imax CEO Rich Gelfond. "Broadway is long celebrated for providing the kind of premium experiences our fans know and love, and we're excited to grow our partnership with them and further establish IMAX as the go-to destination for immersive blockbuster entertainment in China."

"With the continuous upgrade of China's film industry and content, the premium movie experience represented by Imax has become the key driving force to attract audiences back and strongly support the box office recovery post pandemic. We are very excited to further expand our long-term successful partnership with Imax,” Broadway Cinemas CEO Tessa Lau said. “We believe that Broadway's high-quality cinema and the strong technology and brand of Imax when combined with these high-profile projects, will create new landmarks for urban movie watching experience."