Beginning July 19, the British Film Institute will again be operating the BFI Imax in London’s Waterloo district and globally recognized as the UK’s most iconic cinema and at the forefront of technological and architectural innovation. 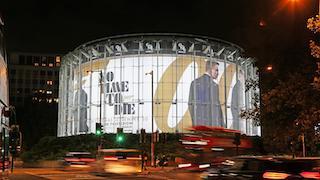 After coming to the end of a successful 10-year concession agreement with Odeon, BFI Imax will join BFI Southbank as a flagship BFI cinema venue in London. It will be fully operated and programmed in-house again by the BFI, continuing its relationship with Imax to present audiences with the best formats possible via Imax digital 4K projection and Imax 15/70, the large format Imax giant theatre projection system.

After a short period of closure, BFI Imax will re-open its doors to audiences on July 22 with a program featuring some of the biggest and best films on release in the UK, as well as hosting major film premieres and continuing its education program.

From early July, ticket bookings can be made for Marvel Studios’ Thor: Love and Thunder for screenings via the BFI Imax page on its website https://www.bfi.org.uk/bfi-imax.

BFI Imax will undergo a major re-launch later in 2022. The new vision and plans for the venue will be announced in the autumn.