The Brooklyn Film Festival has announced their full slate of films for the 2016 edition of this Brooklyn cultural mainstay, which will include the U.S. premiere of Sean Garrity’s award-winning Borealis set to open the festival June 3. This charming, moving and often comedic family drama stars Jonas Chernick, Joey King, Emily Hampshire and Kevin Pollak and has picked up several awards on the festival circuit, including best director for Garrity and a special jury prize for King at the Canadian Filmmakers’ Festival and an honorable mention for best actress award at the 2015 Vancouver International Film Festival.  Pollak, Chernick, Hampshire, King and director Garrity are confirmed to attend.

The festival returns this year to the Wythe Hotel in Williamsburg. This year’s festival includes 107 features and shorts from 31 countries spread over 6 continents including 20 world premieres, 18 US bows, and 30 East Coast debuts. 23 films are screening in NYC for the first time. 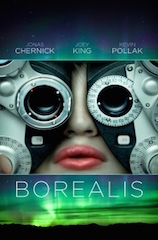 Among the world premiere features is Art Jones’ Forbidden Cuba, a dramatic comedy that follows an American businessman to Cuba, where his covert mission is to find an executive gone rogue while planting the seeds for future business expansion. This marks the first US feature film shot in Cuba since 1959. The 5:30pm screening of Forbidden Cuba on 6/11 at Windmill Studios will be followed by a panel discussion about the experience of making an American film in Cuba.

Love Is All You Need is the debut feature from Kim Rocco Shields, and takes a unique look at bullying, prejudice, and human rights by imagining a world where homosexuality is the norm and heterophobia is common. Where a town is rocked when the local star quarterback is outed for being a heterosexual and a young girl is bullied for having a crush on a boy at school.

"From Canada to Iran to The Philippines to Belgium to China and Cuba, the 2016 fest is one of our most diverse ever,” said BFF executive director Marco Ursino. “Brooklyn is one of the most diverse cities in the world and its reputation as a cultural hub is increasing with each year. We’re pleased and honored to be able to bring the work of these exceptional global filmmakers to our audience.”

Other special events during the fest include the 12th annual KidsFilmFest 2016 on June 4 at the Made in NY Media Center by IFP; the Filmmakers Party on June 8 at the new Double RL store in Williamsburg; the BFF Exchange series of panels on June 11 at BRIC House (including sessions about the Fair Use doctrine, a doc pitch session and Virtual Reality: A Practical Look; The Experiment Edition party also on June 11, and the June 12 Awards Ceremony at Windmill Studios NYC.

Main BFF venues are the Wythe Hotel and Windmill Studios NYC in Greenpoint. Satellite locations include Syndicated in Bushwick, Made in New York Media Center by IFP in Dumbo, and BRIC House in Fort Greene.

For more info about the festival please visit www.brooklynfilmfestival.org.