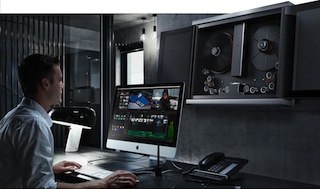 In what counted as one of the surprises at the event, Blackmagic Design unveiled the Blackmagic Cintel film scanner earlier this month at the National Association of Broadcasters show in Las Vegas. The real time system can scan 16mm and 35mm film into UltraHD.

No other company in the world has more experience at scanning film than Cintel, and now that knowledge has been combined with the latest technology to produce the new Blackmagic Cintel film scanner. The new Cintel scanner has been designed with an architectural aesthetic and it’s so thin it can even be wall mounted. It features totally redesigned digital servos, high intensity diffuse light source and imaging systems, so you get a real time scanner that scans 35mm and 16mm film up to 30fps in Ultra HD resolution. Now you can use film for post-production or unlock millions of hours of film based content for scanning to Ultra HD masters for a new future world of exciting Ultra HD distribution.

With consumers purchasing large Ultra HD televisions in massive quantities right now, the demand for great Ultra HD content has never been greater and will become a boom market in the next few years. Ultra HD is incredible quality and there are millions of hours of Ultra HD content that’s been generated over the last 100 years locked up in 35mm film that is stored in vaults worldwide. The new Cintel scanner will scan negative and positive 35mm film into Ultra HD and you can unlock the extra resolution from 35mm film that no one has been able to see until now. 35mm film is natively 4K so the extra quality is already in the film.

Designed to hang beautifully on the wall, the Cintel film scanner is constructed using aircraft design techniques for a stiff and vibration free main deck so you get smooth film handling. The core chassis has been designed as a super rigid structural space frame, which results in a design that’s dramatically lighter than an older simplistic heavy plate design. This means the Cintel scanner is light enough to be wall mounted in your facility, making it part of the environment of your color correction suite. Being super thin and wall mounted, it’s out of the way until you need to use it, and then it springs to life and performs. Whether wall or desk mounted the innovative design includes sliding doors, built in cleaning rollers and new digital servos to keep your film clean and ensures handling of valuable negative remains gentle.

The Cintel Film Scanner is the world’s first real time 4K film scanner to use Thunderbolt 2, making it super easy to set up and install. The new diffuse high intensity light source means the Cintel scanner runs at a smooth real time speed keeping film handling gentle and transfers super fast. The Thunderbolt 2 connection features a massive 20 Gb/s speed so you can transfer all this data direct into your computer without quality limitations. You can even change computers simply by unplugging the single Thunderbolt cable. If you’re wall mounting then you can use the longer 30 meter Thunderbolt cables to connect to your grading computer even when hiding the cabling in the wall. With the Cintel scanner, you get the high resolution of a film scanner with the real time use of a traditional telecine.