Screened in 4K resolution, stereo 3D, and at 120 frames a second, the film made its debut at Beijing Bona Youtang International Cineplex on November 6, and will premiere at the Shanghai Film Art Center on November 8. The Beijing premiere was attended by director Ang Lee and cast members Joe Alwyn and Mason Lee. The trio will subsequently travel to Shanghai for the final leg of the film’s Asian premiere, which kicked off in Taipei last week. 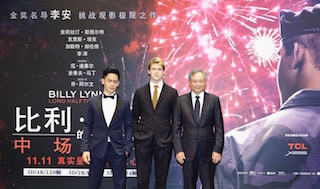 “We are very proud to be one of the few cinemas around the world to be equipped with the Christie Mirage 4KLH RGB laser projection system – the only projector that is capable of screening Billy Lynn’s Long Halftime Walk in 4K, 3D, and 120 fps that’s faithful to director Ang Lee’s vision. This is the ultimate presentation of the movie with bright and highly realistic visuals, and we are excited to offer the most spectacular cinematic experience to our patrons,” said Dong Yu, president, Bona Film Group.

Zhonglun Ren, president, Shanghai Film Group said, “Having worked closely with Christie to unveil the world’s first commercial RGB laser projection system in 2014, we are honored and thrilled to be among a select few premium venues worldwide to once again push the technological boundaries of movie presentations by equipping our flagship auditorium with the dual-head Christie Mirage 4KLH RGB laser projection system for screenings director Lee’s technologically groundbreaking film in 4K, 3D, and 120 fps. We are proud to play a part in making cinema history with this exceptional movie presentation that no other filmmaker has attempted.”

In the United States, the dual Christie Mirage projectors delivered the east coast premiere at the New York Film Festival and are set to repeat this momentous showing for west-coast audiences at the ArcLight Cinemas Cinerama Dome on November 10.

“We’re delighted that Bona Film Group and Shanghai Film Group have installed our dual-head Mirage 4KLH system to bring director Ang Lee’s definitive version of Billy Lynn’s Long Halftime Walk – in 4K, 3D, and 120 fps with a brightness of 28 foot-lamberts – to audiences in Beijing and Shanghai,” said Jason Pei, deputy general manager, Christie China. “The Christie Mirage system is the most advanced projection system available, and the only system that can screen this landmark film in the way that the Director intended it to be seen. We are thankful to Bona Film Group and Shanghai Film Group for all their hard work to make the screening of this film in 4K, 3D, and 120 fps a reality. Without their full support and cooperation, this would not have been possible.”

Lin Yu, vice president, Christie Asia Pacific added, “Christie has set a new milestone in cinema projection with the presentation of Billy Lynn’s Long Halftime Walk in the unprecedented format of 4K, 3D, and 120 fps with our Mirage system. From the premiere screenings in New York, Taipei, and now in Beijing and Shanghai, Christie is the only projector manufacturer in the world that is able to display Lee’s vision as intended, and this clearly demonstrates the superiority of our projection technologies.”