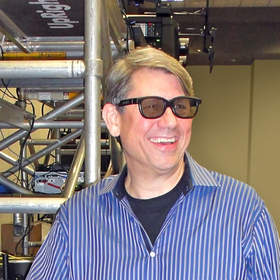 Laser Light Engines founder and executive vice president, Bill Beck, has been elected chairman of the Laser Illuminated Projector Association (LIPA), an international organization whose purpose is to speed the adoption of laser illuminated projectors through cooperative industry activity.

"Bill Beck is a photonics visionary and a leader in the laser industry," said outgoing chairman Pete Ludé, "I have full faith that under his chairmanship LIPA will be instrumental in creating a rational playing field where laser illumination is introduced to a new generation of applications and market opportunities."

Bill Beck was a founding member of LIPA in 2011, along with other industry leaders, creating the organization to educate stakeholders, promote the advantages of laser illumination in new applications, and work with government bodies to define and enact reasonable regulations for laser projection safety. As membership chair for the organization, Beck has been instrumental in increasing LIPA's membership to 25, including many global industry giants including projector OEMs, supply chain participants and pioneering end-users. Most recently, Bill and LLE contributed to an influential peer-reviewed paper supporting LIPA's assertion that laser projection is no more hazardous than lamp-based projectors.

As the founder of Laser Light Engines, Beck has been the driving force behind success of the company and the acceptance of laser illumination by the Digital Cinema market.

Beck said for the past two years, LIPA has focused on regulations for cinema projection, where the technology provides better brightness and images in Digital and 3D Cinema. "Now, with much of that work accomplished and lasers beginning to be adopted by leading cinema companies, LIPA will be expanding its activities to promote laser illumination in other performance projection applications, including premium large venue, theme park attractions, advanced 3D visualization and simulation," Beck said.

Beck will make his first public appearance as the new chair of LIPA at the upcoming Projection Summit in Orlando, Florida, where he will present a talk about laser illumination in premium dual projector 3D applications.

"I'm excited to take on the challenge of leading LIPA for the next two years," Beck said, "but I still like to wear my membership 'hat' and I will continue to focus on bringing in new members from the laser community to help us promote and advance this important new technology."

Beck will continue to serve as Laser Light Engine's executive vice president for business development. His term as LIPA chairman runs from June 1, 2013 to May 31, 2015.