Belgium’s A Sound: Two Decades of Film and TV Experience

As the owner of A Sound, one of Belgium’s leading post-production sound companies, Thierry De Vries leads a highly experienced team of sound designers, composers and re-recording mixers that over the past 25 years has worked on many features, shorts and television programs. These include such films as Torpedo, Gangsta, D'Ardennen, Matroesjka’s, Het Eiland and Professor T. De Vries most recently worked on the television series Fair Trade and the Spanish feature film, Libertad. De Vries has also worked on many commercials and museum projects. 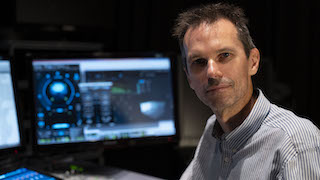 De Vries has been a long time Nugen Audio user, and was one of the first to test Nugen’s Halo Upmix plug-in. “We already had some of Nugen’s measurement plug-ins and, in speaking with the team at various conventions, I became interested in testing out Halo,” he says. “When I tested Halo Upmix, I was really impressed with the quality of its algorithm. I liked the plug-in a lot and have continually implemented it in my mixes since that time.”

De Vries finds that his Nugen plug-ins have integrated seamlessly into his workflow. “When you are working on a project mixing for 5.1 surround or higher, you often start with elements that are sent in stereo,” he adds. “It is really nice to have Halo Upmix, which allows you to upmix the material from stereo to the higher format of 5.1. We also work with Dolby Atmos and being able to do the height up mixing with Halo is great. With Halo Upmix, we can go to 5.1 and also 7.1.4 with high channels. We can steer things to the ceiling, choosing what processes to use and what files we have in the various channels. We’re also able to manipulate the surround in such a way that it’s still compatible with the stereo version.”

In addition to Halo Upmix, De Vries also incorporates Nugen’s VisLM and LM-Correct loudness compliance plug-ins into his daily workflow. “At some point, the whole world started adapting to the R128 measurement system and Nugen was one of the original companies to make plug-ins for compliance,” says De Vries. “In testing, it was clear that Nugen’s was heads and tails above the rest. Nugen’s implementation and VisLM loudness measurement system was great. The idea is to have less distortion, less overly compressed mixes and more dynamics, especially on television programs, and VisLM works flawlessly. In addition, Nugen’s LM-Correct has more capabilities than its competitors. Nugen does a great job with these measurement plug-ins.”