Last weekend AMC Theatres experienced its third-highest attended weekend since movie theatres reopened in the summer of 2020. More than four million tickets were sold globally at AMC locations Thursday through Sunday, based on the strength of the successful opening weekend of The Batman from Warner Bros. and DC. This outpaces the year-over-year attendance for the same weekend in both 2019 and 2020. 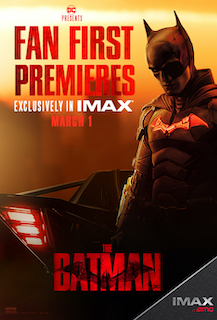 AMC’s strategic focus was also on display. AMC has been significantly increasing the number of its premium large format screens and will continue to do so going forward. In the United States, more than 11 percent of the entire The Batman box office performance came from an Imax at AMC, Dolby Cinema at AMC, or Prime at AMC screen.

Adam Aron, chairman and CEO of AMC said, “The Bat-Signal went out at AMCs around the world and did moviegoers ever show up in response to see The Batman at an AMC Theatre. Congratulations to our partners at Warner Bros. and DC on the biggest movie event so far in 2022. In fact, it was the third biggest weekend for AMC in more than two full years. We are gratified to see AMC’s U.S. market share of 29 percent be this high, signaling that millions of guests chose to see this very successful theatrical release with us. And materially leading the way were our premium screens, namely Imax at AMC, Dolby Cinema at AMC and Prime at AMC.”