Barco announced today that it has to date produced 100,000 digital cinema projectors. The company says the milestone is testament to the longevity and sustained heritage of innovation shared by Barco, its partners, and the exhibition community. 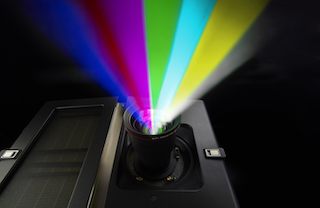 The company first began to market digital cinema projectors in 1999.

At the turn of the 21st century, the film and cinema experience underwent an unprecedented change as it moved from the traditional analog world of celluloid film into a new digital age. Barco has been a market and technology driver in these digital innovations ever since the early days.

The digitalization of cinema accelerated after the release of the ground-breaking 3D blockbuster Avatar (2009), with more than 90 percent of the market transitioning to digital projection in the years that followed. The conversion to digital cinema has enabled a significant growth in the global cinema market doubling the number of screens from 100,000 to close to 200,000 today.

Ignace Rombaut, Barco's vice president of projection said, "This is not the end of the success story. Digital projection and the more recent switch from lamp to laser light sources only delivers more advantages for customers. From R&D to production, and from design to end-user, laser is embedded in everything we do as the right choice for the future of cinema. From image quality to sustainability there is still untapped potential for further growth, and I am convinced that the outlook is bright for cinema."

Nicolas Vanden Abeele, senior vice president entertainment at Barco added, "We want to thank all our loyal partners, customers and employees for their support in this joint achievement. Despite periods of challenge, cinema has always rallied as an industry to exceed expectations and continue to deliver the best experience when seeing a film. Our colleagues around the world are committed for the long-term to help elevate cinema again to the next level using our all-laser digital cinema projector portfolio for many years to come."