Avatar: The Way of Water Releasing in ScreenX and 4DX Formats 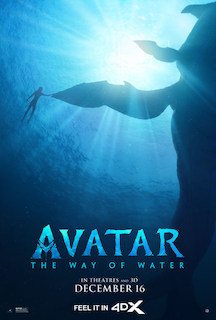 Set more than a decade after the events of the first film, Avatar: The Way of Water, paired with CJ 4DPlex's cinematic formats, is guaranteed to be the most immersive viewing experience for the sci-fi adventure.

For the first time ever, audiences will be able to witness the lush lands of Pandora in the visually immersive, 270-degree panoramic viewing experience with exclusive story-enhancing imagery only available in ScreenX. CJ 4DPlex worked closely with 20th Century Studios, James Cameron and Lightstorm Entertainment to ensure the highest quality presentation of the exhilarating journey.

Avatar: The Way of Water will be available on over 349 ScreenX screens worldwide.

4DX submerges audiences into the action of the film by utilizing more 21 unique motion and environmental effects. It transcends the traditional movie-going experience with special effects like vibration, water, wind, snow, lightning, and scents, among others. Avatar: The Way of Water will be on more than 783 4DX screens worldwide.

"Thirteen years ago, Avatar catapulted the industry into the future and Avatar: The Way of Water is sure to continue that tradition," said Don Savant, CEO and president, CJ 4DPlex America. "Thank you, 20th Century Studios, James Cameron and Lightstorm Entertainment for your close collaboration and the opportunity to share the breathtaking world of Pandora in ScreenX and 4DX."