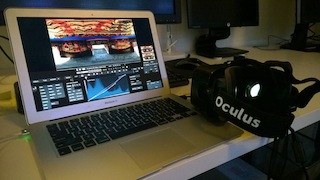 Scratch Play now supports Cylindrical, Equirectangular, and Cube formats for output to a secondary monitor, or an Oculus Rift DKI or DKII. With a Rift connected, these formats are mapped in real-time to Rift output, with full head-tracking support. Scratch Play will output in 360 mode with just a normal secondary display/monitor acting as a window into the virtual world, with real-time ability to pan, track, and tilt around the sphere. This means that developers creating cinematic content for the Rift, now have a powerful playback tool that allows them to instantly review VR shots in real-time.

"Scratch Play has increased my productivity when comparing footage and speeding up iterations for Cinematic VR,” said Greg Downing, CTO of xRez Studios in Santa Monica, California. “Being able to do A/B comparisons quickly, live in the rift headset, is an effective way to rapidly evaluate your work and decide if you are going in the right direction. Another feature I really like that speeds up the workflow is the ability to read frame sequences rather than having to go through the additional steps of encoding a video. Short-cutting the video encoding step when working with CGI, at this resolution, is a big time saver."

“Scratch Play is without a doubt the world’s most versatile media player for folks creating professional content,” said Steve Bannerman, Assimilate’s vice president of marketing. “From DPs setting looks on the set of some of the biggest motion pictures to VFX artists instantly reviewing their renders in context, to the incredible new world of cinematic VR, Scratch Play is touching the coolest content on the planet.”

Scratch Play v8.2 is available immediately as a FREE download at www.assimilateinc.com.

Scratch Play Premium, the ad-free version of Play, is available as an annual subscription for $5 per year- also from www.asssimilateinc.com.