Arri announced today that it will begin shipping Alexa Mini LF cameras with final production software starting September 18. Owners of pre-production cameras can download the updated software and install it on their cameras. 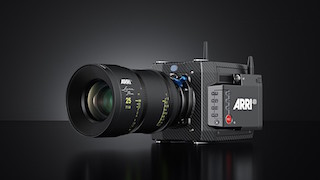 “Large format is taking off now,” says Stephan Schenk, managing director of Arri Cine Technik and responsible for Arri’s business unit camera systems. “In 2018, when we introduced the Alexa large-format camera system with the Alexa LF camera, Arri Signature Prime lenses, and LPL lens mount, the production community was excited to try something new. By now, many have worked with the Alexa LF and are appreciative of the unique large-format look of our LF sensor. Now that the Alexa Mini LF is officially shipping, we can offer the perfect team of tools. Together, the fully-featured, high-speed Alexa LF and the small and lightweight Alexa Mini LF can tackle any job.”

Both cameras share the same large-format sensor based on technology used in all Arri digital cameras. Therefore, both share Arri’s best overall image quality with the highest dynamic range of any production camera as well as Arri color science for natural colorimetry, pleasing skin tones, clean VFX, and easy color grading. However, the LF sensor has twice the area of Super 35 sensors for that unique large-format look, increased sharpness, higher contrast, and smoother images combined with a lower noise floor for higher usable sensitivity.

Marc Shipman-Mueller, product manager camera systems at Arri adds, “After we announced the Alexa Mini LF, demand was so great, and many cinematographers really wanted to use the camera on their projects, that we decided to make pre-production cameras available before the official shipping date. We are happy that the pre-production camera’s performance has met our customer’s expectations. Alexa Mini LFs have been on some spectacular high-end feature films, commercials, and TV series already and cinematographers are very pleased with the results. All that we have learned from those productions has, of course, been incorporated into the final production software.”

For more information about the Alexa Mini LF visit: www.arri.com/alexaminilf