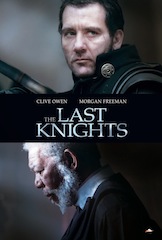 “We’re extremely pleased to announce the incredible reception Last Knights received at AFM,” said Clay Epstein, SVP Sales and Acquisitions for Arclight Films. “We had aggressive offers from all over the world and we’re delighted to have not only met but exceed distributors expectations for the film.”

In Asia, Last Knights was bought by Colorful Garden Co for Myanmar, Pioneer Films for Philippines, PT Amero Mitra for Indonesia, Ram Indo for Malaysia and Viswaas for India.

In Europe, the film was acquired by Aqua Piena for Turkey, Hollywood Entertainment for Greece/Cyprus, Mediaset España for Spain, Signature for the UK, Wild Bunch for Germany and Artfilm for C.I.S.

Australian rights for Last Knights were taken by Transmission Films while South Africa was claimed by Silverbird Cinemas and Italia Film International for the Middle East.

Multiple offers from various territories around the world are still being fielded.

Last Knights is a penetrating action film about 47 warriors who hatch a plan to obliterate the corrupt empire after their master is unfairly condemned to death by a dubious underling of the Emperor.