The Arcadia Cinema in Melzo, Italy, will present Avatar: The Way of Water with what the exhibitor says is the upgraded projection quality of the PLF Energia Screen. The screen will enhance the existing RGB laser system to reach 100,000 lumens on a 30 meters wide screen, the company said. 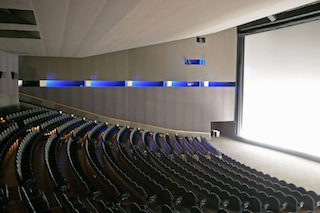 This record has been achieved by adding the RGB Laser source Lux2 from Cinemeccanica to the existing Christie CP4230 dual projectors, the exhibitor said.

The first Cinemeccanica Lux2, which was installed in 2016, provided 50,000 lumens. The exhibitor has also installed Dolby Atmos immersive sound on a Meyer Sound audio system.

The Arcadia says its recent investment efforts are a further step forward in the goal to constantly improve the theatrical presentation offered to moviegoers, while at the same time fully respecting the greatest filmmakers’ intent.