Todd Douglas Miller, the filmmaker behind the critically acclaimed Apollo 11 moon-landing documentary, will present the keynote at the 2019 National Association of Broadcaster Show’s Future of Cinema Conference, produced in partnership with the Society of Motion Picture and Television Engineers. 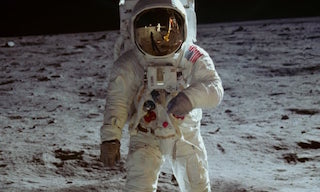 The conference, entitled Now, Next, and Beyond the Yellow Brick Road, will take place April 6-7 in Las Vegas. Miller’s keynote will describe the process of making Apollo 11, which premiered in January at the Sundance Film Festival, where it received a Special Grand Jury Prize for Editing.

Working with pristine, unprocessed, never-before-seen 65 mm footage recently discovered in the National Archives and Records Administration, as well as 11,000 hours of un-catalogued NASA audio recordings, Miller and his colleagues first digitized and restored the film. Next, the team created an 8K transfer that represents the highest-resolution, highest-quality digital collection of Apollo 11 footage. The 93-minute motion picture, which was cut from this transfer, revives the historic 1969 moon landing by Apollo 11 mission commander Neil Armstrong and pilot Buzz Aldrin with breathtaking clarity.

Critics have called Apollo 11 astonishing, with Variety saying the film "images channel the wonder of the unprecedented ... a dream made real." The film opens exclusively in Imax theaters on March 1 and everywhere on March 8, and is being distributed by Neon/CNN Films.

Miller’s work also includes the Emmy Award-winning Dinosaur 13, which premiered at the 2014 Sundance Film Festival and was acquired by Lionsgate and CNN Films. His other films include Gahanna Bill, Scaring the Fish, and The Last Steps. Miller’s company, Statement Pictures, based in Brooklyn, New York, produces feature-length films, documentaries, and large-format/Imax films for science centers and museums. His short-form work has won numerous international and national awards, including the Cine Golden Eagle, Telly, Aurora, and AXIEM Award.

“Our intention with Apollo 11 was to make an art film out of all of the archival materials that we had available,” said Miller, “and in the end, we created a direct, fly-on-the-wall cinema experience. Both the art and science of working with images and sound were critical throughout this project, and I look forward to discussing how they came together during the process of making Apollo 11 a reality.”