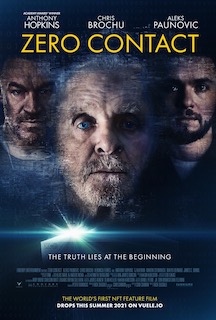 The movie follows five characters based all over the world and connected only by their devotion to the late founder and tech titan Finley Hart (played by Anthony Hopkins). They are forced to work together to shut down Hart’s most secret invention – a machine that is either the solution to mankind’s problems or the end of life on earth.

The movie was produced remotely in 17 different territories during the early waves of the global pandemic in 2020. The production relied heavily on using Zoom to shoot scenes. The story follows five characters from around the world"connected only by their devotion to tech giant Finley Hart (Hopkins). The five discover a secret invention by the tech giant and collaborate to shut it down as it provides "either the solution to mankind's problems or the end of life on earth."

NFTs use the same type of technology that underpins cryptocurrencies to verify the authenticity of other digital assets like artwork, recordings, movies, and a wide range of virtual collectibles. Vuele members will have the opportunity to purchase and watch feature-length films like Zero Contact and other highly sought-after content, including behind-the-scenes and never-before-seen footage, bonus features, exclusive Q&As, #filmobilia, and much more.

Vueles will be available to be watched, collected, and shared exclusively on the Vuele platform. Vuele members will enjoy access to exclusive, limited-edition film and film content – a truly unique experience for movie fans and digital collectors alike.

“This project was truly a one-of-a-kind experience,” said Rick Dugdale, Vuele co-head. “We had to innovate at every step of the way, shooting in 17 countries around the world during a global pandemic. It only makes sense for a film like this to continue its ground-breaking trajectory by revolutionizing the way Hollywood films are premiered, viewed, and shared utilizing blockchain technology.”

Cameron Chell, co-head of Vuele said, “For Vuele’s very first movie to be featuring such a high-profile star is a major endorsement for what we see as the next frontier for Hollywood and how it will premiere feature-length films and merchandise collectibles surrounding the films produced. This is just the beginning for our platform and NFT capabilities which will enable our partners to explore new opportunities and set new standards of how movies will be consumed by fans and collectors. Vuele is perfectly poised to transform the direct-to-consumer entertainment distribution channel.”