The American Society of Cinematographers has named Terry McCarthy as CEO of the organization. In this newly created role, McCarthy is responsible for all business matters relating to the Society, including events, educational efforts, and publishing. 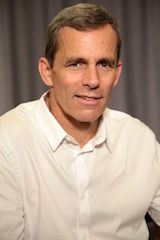 With more than 30 years of experience in journalism, McCarthy is a four-time Emmy winner and recipient of an Edward R. Murrow Award. He also brings extensive non-profit management experience to the ASC, having previously served as president of the American Academy in Berlin, and prior to that as president and CEO of the Los Angeles World Affairs Council.

“Terry’s exceptional background in media and global relationship building will help to guide our ongoing outreach and visibility, and expand our publishing and web activities,” says ASC president Kees van Oostrum. “Our mission is to drive cinematography into the future, steering the conversations around modern image making. The Society and its members are uniquely able to play an important role in maintaining the intentions of filmmakers amidst an expansive landscape of new tools and distribution platforms.”

“It’s an exciting time to step into this role,” says McCarthy. “The entire industry is going through a period of creative disruption. Cinematographers, with one foot in the artistic side and one foot in the technology side, are perfectly placed to play a major role in determining how movies, television and even video games will look in the future. The ASC will shape this discussion through our educational efforts both with our masterclasses, technology committees and public talks at the Clubhouse, as well as in the pages of our magazine, American Cinematographer.”

On the heels of announcing ASC’s associate membership with IMAGO, van Oostrum highlights ambitious plans for the ASC moving into 2020. McCarthy says, “We plan to further expand our international sessions of the popular ASC Master Classes. We will also program and host our biennial International Summit in June.”

McCarthy adds that there will be special events throughout the year to celebrate the 100th anniversary of American Cinematographer. “This magazine continues to have iconic status, and by the end of this year we will have every one of its 1,200 issues available in a searchable online database – a real treasure trove of 100 years of cinematography.”

The work of several ASC Committees rounds out the Society’s commitment to advancing the art of cinematography, including the Motion Imaging Technology Council, Vision Committee, and Education and Outreach group.

The ASC has more than 400 members around the world, with more than 200 associate members working in allied sectors of the industry.