Alamo Drafthouse Cinemas has announced that it will be the anchor tenant for a company called Orchestra Partners as it redevelops the historic Powell Steam Plant in Birmingham, Alabama. The theater will take up about 50,000 square feet of the former steam plant, while the remaining 36,000 square feet are still available for retail and dining. Construction on Alamo Drafthouse will begin this summer with an anticipated opening in the fall of 2023. 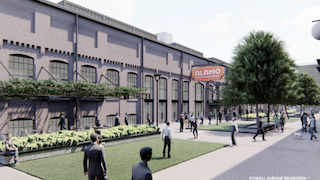 Orchestra Partners co-founder and principal Hunter Renfroe said conversations began about two years ago, but the beginning of the COVID-19 pandemic put off any progress for about a year. In the meantime, some work began on the steam plant location to “create a vibrant entertainment destination.”

Chris Drazba, chief development officer at Alamo Drafthouse Cinema, said the company has a love for historic buildings and “a real knack for turning old, cool things into super cool new things.” The steam plant fits into the company’s vision of creating center for community gatherings, within walking distance of urban population centers.

“We’re going to build a really incredible theater and just a magnetic draw into the City of Birmingham,” he said. “You’ve given us a backdrop do something really magical here.”

Alamo Drafthouse, in addition to movies, has a themed bar offering at least 32 craft beers on tap, as well as craft cocktails. Dining options include salads, burgers, pizza, sandwiches and shakes. “There’s a little something for everyone,” Drazba said.

John Martin, partner with Alamo Drafthouse, said the move made total sense. “It’s been a dream of mine coming to the Deep South,” he said.

The Powell Avenue Steam Plant was built in 1895 by the Consolidated Electric Light & Power Co. It provided steam and electricity for downtown and powered the city streetcar system. The plant was acquired by Alabama Power in 1952 when the two companies merged.

Orchestra Partners also plans to redevelop the lot adjacent to the steam plant, which could include a hotel project and apartments, with the street between serving as a pedestrian center for outdoor gatherings.