Adobe announced today that its cloud-based video-collaboration capabilities for its Frame.io division will be built directly into cameras from Red and Fujifilm. The company calls this the purest expression yet of a decade’s worth of efforts to create camera-to-cloud integrations that connect production units with the remote teams that subsequently work on the resulting video and stills. 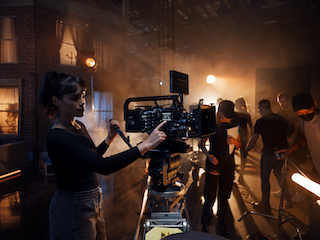 “If you think about a camera, it's just a computer with a lens on it, right?” said Michael Cioni, an Adobe senior director, global innovation creative product. “These cameras now have the ability to connect directly into Frame.io and other Adobe apps from the camera menus and there's no other devices, there's no other components.”

The new capabilities will arrive as firmware updates for both companies’ flagship cameras over the next few months, Cioni said. He called the deal “a new revelation in collaboration. And I truly stand by the word ‘revelation’ here, it's so significant.”

More content is being made than ever, and not just by teams of top Hollywood professionals. There are now dozens of notable film and TV production centers around the world, from London to Bollywood to South Korea, Turkey, Mexico, Australia, and beyond. Add in dozens of brands and agencies creating content with in-house and contract teams, and the bewildering profusion of up-and-coming talents carving out significant audiences on social media, live streaming, esports and beyond, and it’s a lot.

And more and more of those teams are collaborating remotely, with post-production work on editing, color grading, and visual effects, executive/client reviews and approvals, and much else.

“How do those teams build that content,” Cioni said. “They need solutions to improve their speed and scale so that you can fuel the global economy with more content. this is what sort of motivates the idea that how do we really improve speed and scale? And at what level can we do it?” 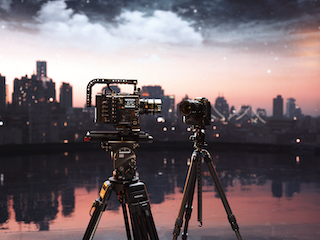 For higher-end Hollywood-style productions, Red’s V-Raptor and V-Raptor XL will be able to upload 8K-resolution Redcode Raw video files directly from menus in the cameras themselves.

Such direct uploads of huge 8K files would require an extremely beefy Internet connection, something that’s frequently not available on set, Cioni acknowledged. But even in the shorter term, with speedier 5G wireless connections widely available, the cameras will be able to upload native ProRes proxy files that include “every ounce of asset metadata available in the camera.”

Such proxies are lower-resolution files that can be more easily and quickly moved around and manipulated using today’s editing systems and networks, before full-resolution files arrive to be swapped in. Demos show automatic transmission of an 8K-resolution Raw R3D file, a log file, a CDL, a PreRes proxy fit, a WAV, and a custom look-up table, or LUT, for each take the camera records.

For production teams filming higher-end projects, the daily production grind in recent years has involved a time-consuming and laborious process of moving and copying files from cameras or removable disks to hard drives that can be shipped physically to post-production operations. In an interim improvement to that process, Frame.io has signed deals with dozens of services providers and camera makers to build digital “hooks” into their hardware and software packages to connect with Frame.io for collaboration across systems once that video has been ingested in cloud-based post-production systems.

“It also increases the flexibility and control you have over the way you work,” Cioni wrote in a white paper. “Imagine your raw camera footage being instantly backed up and accessible to anyone without downloading or shipping a drive. As bandwidth improves, the expectation for immediate access to footage will become the most vital component to an efficient workflow. By evolving the technology to include in-camera automatic file transmission, we’re making enormous strides toward accomplishing this goal for productions of all types, sizes, and budgets.”

The Fujifilm deal involves the X-H2S, which targets a substantively different industry sector than Red. The X-H2S launched recently to strong reviews for its flexibility as both an extremely capable and flexible digital stills camera and one able to capture video in 6K resolution.

The X-H2S connectivity will require usage of a separate Fuji add-on, the FT-XH, which handles Internet file transfers for the camera. In his white paper, Cioni wrote that such real-time sharing will be “especially useful for multidisciplinary creative teams, so that assets like stills and graphics can be easily organized into the same Frame.io project along with video.”