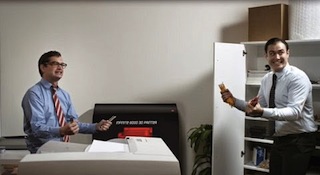 Created by Gordon West, a creative director at Y&R, Chicago with the help of Filmworkers executive producer Derek de Board, the spot centers on a pair of office workers who become intrigued by the almost magical powers of a gizmo called the Infinite 8000 3D Printer. After using the machine to produce mass duplicates of a hole puncher and a pencil, the dim-witted duo have the bright idea of producing infinite copies of their favorite brand of tortilla chip. They prove to be a bit too eager, however, inserting a chip into the machine while it’s still in the grasp of a fellow worker. The results are, well, you’ll just have to watch the spot.

De Board’s and West’s Infinite 8000 3D Printer spot is vying against other fan-made ads for a chance to air during this year’s Super Bowl telecast. The pair could also be eligible for a cash bonus should their spot crack the USA Today Super Bowl Ad Meter.

De Board said that West proposed the idea for the spot when the two met for drinks. “We loved the visual gag but had a heated debate about the 3D printer,” de Board recalls. “Hence the emergency meet-up for drinks at a local bar.”

After they settled on a concept, the two men set off for a local hardware store to purchase parts for the ultra high tech device. “It had to be new, cool and futuristic,” de Board explains. “We envisioned it as a cross between the SpaceX Dragon V2 spaceship and a Xerox machine.”

The finished commercial was produced for a total cost of less than $3,000, including parts for the 3D printer. “We both love 3D printers and wanted to make a spot that showed off a model of a type of printer we hope exists one day,” de Board says. “It’s a ‘throw it in, scan it and hit print’ 3D printer.”