In celebration of Public Image Ltd.’s fortieth anniversary, Abramorama and Verisimilitude have released the first official trailer and poster of the new music documentary The Public Image Is Rotten. The career-spanning documentary, tells the story of music icon John Lydon and his pioneering group PiL with a level of depth and intimacy never before seen. 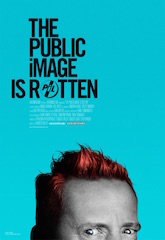 Following a sold-out screening at Camden London’s Odeon Cinema, the film will be released in multiple theaters across the United Kingdom and select European cities throughout the summer, followed by a North American theatrical tour in the fall kicking off at New York City’s downtown Metrograph.

Directed by Tabbert Fiiller, The Public Image Is Rotten features in-depth interviews with John Lydon, former and current bandmates as well as Flea (Red Hot Chili Peppers), Ad-Rock (Beastie Boys) and Thurston Moore (Sonic Youth) among others, and the film is loaded with electrifying archival performance and interview footage.

Abramorama’s CEO Karol Martesko-Fenster and West Coast head of acquisitions and business development Evan Saxon said, “We are thrilled to be working with Verisimilitude’s Tyler Brodie and Hunter Gray, alongside John Lydon and longtime PiL manager John Rambo Stevens on the global release. John Lydon forever changed the face of music and pop culture in many of the same ways Elvis did.  The timing of this is perfect as PiL is touring the world and giving fans an amazing live show like never before.  We will leverage the theatrical campaign to work closely with the fantastic team at Universal Music to drive awareness for their comprehensive box set also titled The Public Image Is Rotten.”

John Lydon and his PiL bandmates Lu Edmonds, Scott Firth and Bruce Smith, are currently in the midst of a 36-date tour of UK/Europe and Japan. They are the longest stable line-up in the band's history.