Abramorama Releasing Rockfield: The Studio on the Farm

On May 13 event cinema distributor Abramorama, in collaboration with Qobuz, is partnering with 88.5-FM radio, Southern California’s leading adult album alternative rock station to premiere the music documentary Rockfield: The Studio on the Farm with a nostalgic drive-in movie experience at the Regency 16 Theaters in Van Nuys. 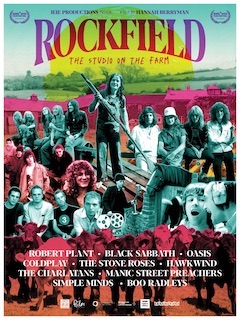 The film features interviews from Robert Plant, Oasis, Ozzy Osbourne and Tony Iommi, Chris Martin and others and offers an honest and no frills look inside one of the greatest recording studios on the planet.

Rockfield Studios in the Welsh countryside was the first 'residential studio' where bands lived, created, ate, drank, drugged, and fought together while producing records that forever changed their lives and music history.   Queen, Black Sabbath, Robert Plant, Oasis, Coldplay, The Stone Roses, Simple Minds are a few of the legendary artists who lived the Rockfield experience and benefitted greatly from the environment that owners and brothers Kingsley and Charles Ford and their family provided.

“In a way the film was about group dynamics, the intensity and ‘make or break’ nature of residential recording, something that with technology is on the wane,” said sirector Hannah Berryman. “That intensity almost broke some bands, but it also produced tracks that have stood the test of time, and maybe you can hear everything that went on this isolated farm in that music, the pleasure and the pain.”

Every fan who rents the film from Abramorama will be offered and extended free trial subscription to Qobuz.