Abramorama and Atlantic Records have expanded the theatrical release of Melanie Martinez’s debut full-length film K-12 to 32 countries, with more than 450 theatrical screenings in seven languages.  Multiple cinemas around the world have added second and third encore screenings to cater to the demand. 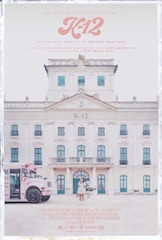 Shot last Fall on location in Budapest, Hungary, K-12 sees Martinez starring as Cry Baby, a strong and sensitive girl who is sent off to a disturbing sleep-away school hidden underneath a grandiose façade. The film is based on the album of the same title, K-12, which marks Martinez’s long anticipated follow-up to her RIAA platinum certified 2015 debut album, Cry Baby.

Abramorama’s head of West Coast operations & acquisitions Evan Saxon and COO Karol Martesko-Fenster added, “We are honored to be working with Melanie Martinez, Atlantic Records, and our many event partners who have come together to enable this theatrical event in tandem with the release of the Melanie’s album “K-12” on 9/6.  Melanie’s global fanbase has spoken loud and clear as K-12 is selling out cinemas around the world.”