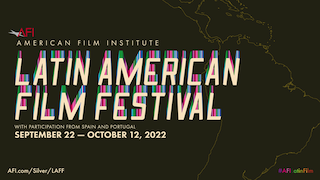 Now in its 33rd year, the festival, which will be held in-person, is one of the largest and longest-running showcases of Latin American cinema in the United States, dedicated to presenting Latin America's prolific and versatile talent during National Hispanic Heritage Month. This year's wide-ranging selection of 41 films from 21 countries spans international festival favorites and award winners, local box-office hits, and dynamic debuts from a new generation of Latin American filmmakers.

The festival opens with the East Coast premiere of Argentina, 1985, the hotly anticipated historical drama from Santiago Mitre (The Summit), starring Ricardo Darín (The Secret in Their Eyes) and Peter Lanzani (The Clan). Written by Mitre and Mariano Llinás (La Flor), the rousing courtroom saga is inspired by the true story of prosecutor Julio Strassera (Darín, who also produces) and the young underdog legal team tasked with bringing Argentina's brutal military junta to justice during a landmark televised trial.

Argentina, 1985 marks the first original Argentinian film from Amazon Studios and will have its world premiere at the Venice Film Festival where it will be in the official competition for the Golden Lion. The festival will also host the U.S. premiere of Mitre's dark, French-language comedy (15 Ways to Kill Your Neighbor), starring Uruguayan actor Daniel Hendler (The Moneychanger) as an Argentine swept up in some surreal happenings in France.

The festival closes with Brazilian-Portuguese co-production Dry Ground Burning, a genre-defying firecracker about queer oil pirates in Brasília from filmmakers Adirley Queirós (Once There Was Brasilia) and Joana Pimenta. The film is set to have its North American premiere at the Toronto International Film Festival this month, after having won the Grand Prize at the Cinéma du Réel Film Festival earlier this year.

The complete slate of all festival selections is available on the AFI website AFI.com/Silver/LAFF/.