Opening night at Teatro alla Scala will be broadcast in high definition by satellite to audiences in cinemas worldwide. The event takes place annually on December 7, the feast day of Milan’s patron saint, Saint Ambrose. This year, La Scala has chosen the Verdi favorite La Traviata, conducted by Daniele Gatti, to kick off the 2013-2014 Season.

On August 20 Robbie Williams will perform at Estonia’s 70,000-capacity Tallinn Song Festival Ground and fans in digital cinemas around the world will have the chance to catch the entertainer live on the big screen.

This year the buzz at CineEurope seemed to be all about alternative content, or event cinema as it’s being increasingly referred to. As chair of the ECA it’s difficult to gain real perspective from the eye of the storm but having seen the business grow from an occasional add-on for exhibitors to a serious revenue stream in more recent years, the sense in Barcelona last month was that in event cinema, the possibilities are endless and the sense of real excitement was tangible. Everyone from major studios to major cinema chains to independents to technical partners seemed keen to know more, hear more, do more to exploit this established and still growing revenue stream. 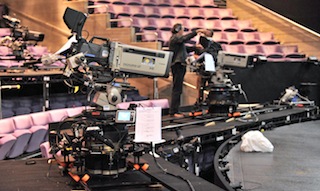