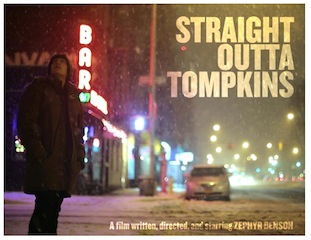 “Not so long ago, it would have been nearly impossible to make a movie of this quality, so quickly, as an ultra-low budget feature,” Benson said. “With the Canon EOS C300 camera, however, my vision became a reality. I think that any filmmaker with a powerful enough desire to tell a story can now just get out there and do it.” Benson speaks from an informed viewpoint. The son of accomplished director, screenwriter, actor, and educator Robby Benson, he was introduced to filmmaking early on by accompanying his father to film sets and sitting-in on his lectures at various universities and film schools. Chief among the lessons he learned was that moviemaking is hard work.

“A lot of challenges can be thrown at you every day,” Benson confided. “Many young filmmakers don’t realize this at first. You can spend hours just setting-up one shot so it looks right and then everything can suddenly go wrong. Then you’ve got to brainstorm and figure out how to make it right, which is the challenge of filmmaking and one of the reasons why I love it. I learned more than I had ever learned in my entire life during the pre-production and filming of this movie. And throughout it all, it was great to look over to my DP and realize that the one thing we didn’t have to worry about was our camera.”

“I don’t think we would have been able to make this movie without the Canon EOS C300 camera,” agreed DP Roots. “From the very beginning we knew that we wanted to shoot the film handheld, so the lightweight body of the EOS C300 camera was quite important, especially since it was on my shoulder most of the time. We also knew we would be working in really tight interior locations, so mobility would be vital. The compact design of the EOS C300 camera and the Canon lenses we used enabled us to be quite agile, which made all the difference in our ability to shoot where we wanted to.” 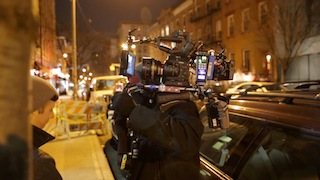 “Our budget dictated minimal lighting, but the Canon EOS C300 camera has amazing low-light performance,” Roots said. “A large part of the film takes place at night on city streets, and we used available light. We filmed in interior locations as well. We routinely shot up to 3200 ISO, which on some other cameras would have resulted in a lot of noise and an undesirable image, but not with the EOS C300 camera. The low-light performance of the EOS C300 camera also saved us from needing an electrical generator for extra lights. We were able to power the few lights we needed off the available power at locations or the outlets in the apartments we used.”

Benson recalled a particular instance in which the low-light performance of the Canon EOS C300 cinema camera moved him to describe it as “the most incredible thing” he’d ever seen. “One night we were shooting on a fire escape, looking down a poorly lit street that, to the naked eye, was barely visible beyond about 30 yards,” he recalled. “Brandon turned on the Canon EOS C300 camera and everything instantly looked illuminated and cinematic. It looked as if we had spent hours lighting the entire block. That was so important for this film because our ultra-low budget gave us hardly any time for lighting set-ups.”

“There was virtually no lighting on that street at all, it was very dark and dim,” added co-executive producer David Rudd. “Brandon turned to us and said ‘I can’t believe what I can see through this camera.’ The Canon EOS C300 camera really digs down into the dark areas of light. It loves the low end of the spectrum. On another occasion we lit a small interior location just by bouncing the glow of a Mini Maglite off the ceiling. We didn’t have the time, budget, or manpower to do anywhere near the lighting you would normally do for a film of this kind, so the Canon EOS C300 camera was extremely beneficial to our project, as were the fast Canon cinema prime lenses we used.” 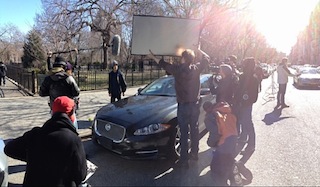 “We used the Canon cinema zoom lenses more for daytime exterior street scenes,” Roots continued. “They gave us the greatest flexibility by enabling us to adjust our framing and move quickly from one set-up to another. We were shooting guerilla-style and the zooms were incredibly versatile in those situations. We used the larger Canon CN-E14.5-60mm T2.6 L SP cinema zoom lens a lot more than I expected we would. We were ‘running-and-gunning’ the whole time, and the flexibility that that zoom gave us when we didn’t have enough time to do a lens change was very helpful and allowed us to move more quickly. The Canon CN-E30-105mm T2.8 L SP compact cinema zoom lens was the longest lens we had, so we used it whenever we needed to get really tight on a shot. There were a number of times where it allowed us to get incredibly close to capture dramatic moments as they happened.”

Roots described the Canon cinema prime and zoom lenses as “incredibly sharp even when we were shooting wide open” He added: “I love how true these lenses were to the images that we were shooting. I’ve seen other lenses that make the image soft or apply some kind of ‘look’ to the scene. Canon cinema prime and zoom lenses don’t do that. They are incredibly accurate, sharp, and clean. What we saw was what we got.”

“I’m a photographer, and I adore the look of the images produced using Canon lenses, which is beautifully warm without being overly saturated,” added co-executive producer Robby Benson. “The Canon cinema prime lenses are remarkably fast and crisp. They allowed us to shoot things at night, which – for an independent film – is a blessing. We actually saw things through these cinema lenses – on the monitor – with better low-light perception than our eyes were capable of.”

The Canon EOS C300 cinema camera records to two Compact Flash cards through dual slots with a choice of serial or parallel (for backup) recording, providing up to 80 minutes of recording time on each 32GB card. “The dual CF card slots are a smart design,” said Roots. “We didn’t have to worry about filling up a card and losing a shot.”

Roots and Robby Benson also noted the advantages of the camera’s SMPTE time code capability. “It helped us immensely in post with syncing up all of the sound and picture.” Robby Benson said, “Even if you shoot a ton of footage, if you play by the rules and know what you’re doing in post, the EOS C300 camera time code feature enables you to find anything you’ve shot.”

Straight Outta Tompkins was filmed in the EOS C300 cinema camera’s Canon Log gamma setting, which helps ensure capture of the full exposure latitude that the camera’s Super 35mm CMOS sensor is capable of. Canon Log gamma image data provides the film-style dynamic range between shadows and highlights that is essential for achieving cinematic subtleties in post-production color grading. “It’s spectacular the latitude that the image gave us and how much detail we had in shadows and highlights,” Roots said. “It was also great to know right from the beginning that we would be able to do a really fine color grade later on during post.”

“When we went to the post house to do a test on our material, Randy Coonfield, colorist from Shapeshifter Post, was amazed with the Canon EOS C300 camera and Canon lenses,” recalled Robby Benson. “We were giving the film more blues and grit, and we had the latitude to take it to places no other project I’ve ever worked on could go. The blacks got blacker; not muddy – no noise, just rich – and the colors were so defined, with exquisite clarity. When we needed more illumination – again, no noise – Coonfield turned to me and David and just said, ‘It’s the camera...it’s the camera and the lenses. Remarkable.’”

Above and beyond its role as the camera that enabled the ultra-low budget Straight Outta Tompkins to get made with high-end cinematic quality in a short space of time, all four filmmakers had special praise for the impact that the Canon EOS C300 cinema camera is having on independent production in general.

“The Canon EOS C300 – as well as Canon’s entire line of EOS cameras – has democratized filmmaking,” Roots stated. “It is amazing to see this footage projected on a big screen. The audience doesn’t know what format we shot it on, nor should it matter to them. It just looks great.”

“Democratized moviemaking – storytelling – is probably the most exciting thing that could ever happen,” Robby Benson emphasized. “Now young filmmakers, older filmmakers, and anyone can tell their story. Of course, you first have to be a good storyteller. That’s always true, regardless of budget. The Canon EOS C300 is a dream camera for low-budget filmmakers. It, and Canon’s cinema prime and zoom lenses, are fully cinematic. I’m a believer in this equipment.”

“What it really boils down to is that Canon is showing the way of the future of filmmaking,” Rudd added. “Nowadays you’ve got to maintain quality while budgets keep dwindling away. You also need a camera that records all the picture information you need. The EOS C300 camera does all of this and more. It makes it possible to tell your stories so they look good. There’s a lot of projects that can be done now because of this camera.”

“The Canon EOS C300 cinema camera makes it possible to make your movie on an ultra-low budget,” Zephyr Benson concluded. “Now aspiring moviemakers can just go and do it. I can’t thank Canon enough for this.”