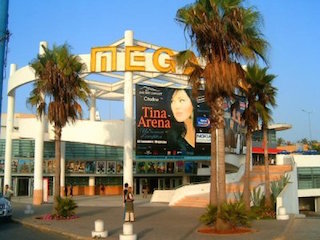 “Following the success of our first 4K laser projector installation, the feedback was extremely positive. We therefore decided to carry on our technical equipment modernization policy to offer the best cinema experience to our audiences,” explained Jean-Pierre Lemoine, chief executive officer of Megarama Group. “The Barco 4K Laser projector is especially suited to our very large Horizon auditoriums due to its technical performance but also because it’s much more economical – we use just one projector, less electricity, fewer consumables, and we get rid of Xenon lamps.”

“We are delighted by the qualitative strategy deployed by Jean-Pierre Lemoine and his teams in France and Morocco,” said Maxime Rigaud, general manager of exhibitor services in France, Switzerland and Africa for Ymagis Group. “The DP4K-60L projector is the most powerful projector in the world. It is a technological breakthrough that allows us to get the greatest contrast and brightness for both 2D and 3D films and an image quality that is identical from one side of the screen to the other with a brightness level that is guaranteed for 30,000 hours.”

Last week, the Megarama Bordeaux (17 screens, 2,955 seats) became the first of the three locations to install the new 4K-laser projector in its Horizon auditorium. The two other installations, in Casablanca and in Marrakech, will take place in the respective Horizon auditoriums (24.5 meter wide screen and a seating capacity of 969 in Casablanca and 25 meter wide screen and 1200 seats in Marrakech) before the end of March. During the second quarter of 2016, all three auditoriums will also be equipped with Dolby Atmos sound systems, providing audiences with an immersive experience and high-fidelity sound quality. With 16 screens and 3,650 seats, Megarama Casablanca is currently the largest working cinema in Africa.

"We’ve installed over ten 4K laser projection systems to date across Europe – in the Netherlands, Denmark, Germany and in Russia,” added Till Cussmann, Ymagis Group’s vice president, exhibitor services. “We are pleased that Megarama has become one of the early adopters and is convinced of both the economic and technical interest of this new projection technology developed by our longtime partner Barco.”