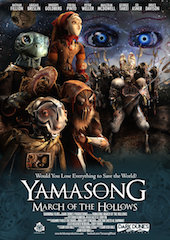 Dark Dunes Productions and Taormina Films have partnered with filmmaker Sam Koji Hale to help realize Yamasong: March of the Hollows, a fantastical puppet vision, with a screenplay by novelist Ekaterina Sedia. The film was executive produced by Toby Froud (son of Brian and Wendy Froud) and Heather Henson (daughter of Jim Henson) and is being released February 15 in select theatres the United States, as part of an exclusive cinematic distribution partnership between Dark Dunes Productions, myCinema and Random Media.

Featuring the voice talents of stars including: Whoopi Goldberg, Nathan Fillion, George Takei, Abigail Breslin, Ed Asner, Peter Weller, and Freida Pinto, Yamasong: March of the Hollows follows an automaton girl, tortoise warrior, and a band of outlaws on an incredible quest. Their one hope is to find a legendary relic that will defeat a sinister mechanized army and save the creatures of their world.

“Yamasong is an innovative movie, featuring some of the most talented people in Hollywood and breakthrough artists involved in puppeteering and production,” said Bruce Eisen, head of content strategy and acquisition for myCinema. “We are thrilled to be able to bring this film to the big screen where it can enjoyed in all of its glory.”