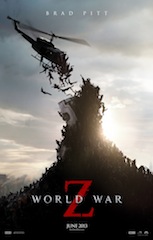 I’m so not a fan of zombies, so who would have thought that, in one six month period, I would have seen two zombie movies – and have enjoyed both in different ways.  Back in February, Warm Bodies gave us Romeo and Juliet updated to the post-apocalyptic future – and with the courage to admit that its romantic lead was one of the undead.  And now, World War Z is Contagion recast as a family story with the plague causing zombies.  The story is predicable, but still there are tension, suspense and some of the best editing and most frightening crowd-replication effects I’ve ever seen.

When director Marc Forster is stuck for an idea, he either signals a zombie attack or a helicopter rescue and so there’s an excess of both in this movie.  And yet, to his credit (and the credit of the writers) Brad Pitt plays a thoughtful, resourceful, courageous man – not a super-hero.  We are on his side because we can relate to him. The zombies are either faceless crazed monsters or individuals overacting to the point where they become ludicrously humorous and with the exception of Pitt, most characters lack depth or personality.  Still, the central concept here is so well staged, it’s a bit frightening.  We’ve all experienced the disruptive power of nature in storms and flood, tornadoes and hurricanes.  But what if that power somehow came from bad wiring in humans?  And what if Brad Pitt weren’t available to save us?