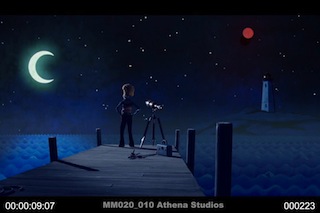 Athena Studios is an Emeryville, California-based full service production and animation studio. The studio has been creating films, video and multimedia projects for over 20 years, and is currently producing a stop-motion short called Mermaids on Mars. The short is based on a book by Nancy Guettier, directed by Jon V. Peters and features the work of artists whose credits include stop motion films Coraline, James and the Giant Peach and The Nightmare Before Christmas.

Mermaids on Mars is a 20-minute film, comprising 300 shots, many with complex compositing demands on a small team of visual effects artist with a post schedule of just over three months. Vince De Quattro is the project’s digital post-production supervisor. “When I came onto this project I set up a Google spreadsheet to manage production assets,” he said. “But once we got to the review stage, it was nearly impossible to track all of the moving parts on this show and stay on top of the latest iteration of a take. Shotgun came to the rescue, and straight out of the box helped me, the artists, our director and compositors get on the same page.”

Mermaids on Mars is the story of a young boy named Julian who is magically transported to Mars where he tries to stop an evil martian from destroying the last of the planet’s mermaids. The entire story is being told piece by piece in painfully meticulous, handcrafted, stop motion animation shot on Athena’s soundstage. From end-to-end, the short film is being shot, produced and finished on-site at Athena Studios and the Shotgun production management and review platform is being used for all post management and shot review.

“Shotgun helps the team do detailed reviews of several iterations of each shot and helps me retain complete control over the eleventh hour artistic process,” continued De Quattro. “Instead of relying on an editor, I can craft a playlist in Shotgun myself, and have anyone on the team access it from a cell phone or iPad remotely or on set—I can work at 2AM and anyone can get updates at anytime since everything’s online.”

Twenty minutes of film with an average of five comp iterations per shot, equates to approximately 300,000 frames processed to final, and with a small team under tight festival deadlines, Athena didn’t have the schedule or resources to develop a custom production tracking solution. De Quattro said, “With Shotgun it was plug-and-play from the get go. Mermaids on Mars is a very small budget production and Shotgun is so inexpensive that even if you have a small show, you can benefit from the production management, review and tracking tools in Shotgun.”

In addition to producing Mermaids on Mars, Athena Studios regularly provides studio services, and provides animation, production and post for commercial clients. Athena also produces executive training videos for sister company Athena Online, and is implementing Shotgun to track that pipeline as well, from production through to transcoding and sound. For more information about