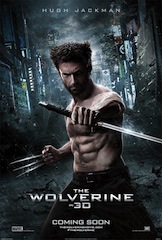 Think of the Wolverine as the Marvel character with the bad haircut, played by an actor who is too old for the role. Yeah, I know this is Hollywood where older men with special powers attract much younger women, but although Jackman is only 17 years older than the beautiful Mariko – played by 28-year old Tao Okamoto – he seems so much older. And filling the movie with unknown Japanese actors who are too similar in appearance (to Western eyes) creates confusion and slows down the story. The plot is good, but it would have benefitted from fewer special effects and more emphasis on the human side of the characters and the story.  And – according to the on-line fans that fully know (and remember) the Wolverine’s powers and vulnerability – it’s full of holes.  So maybe it’s a benefit that I know so little about super heroes and ask myself only:  Is this an entertaining story where the plot held my interest and I left feeling my time has been well-spent?  In this case, the answer is Maybe.  This is better than Man of Steel, not as good as Star Trek.  But, in a summer of impressive train sequences (most recently The Lone Ranger) this movie has the most thrilling battle-on-top-of-a-speeding-bullet-train sequence of all.