Why Did the Makers of Wedlock Choose Canon Gear? 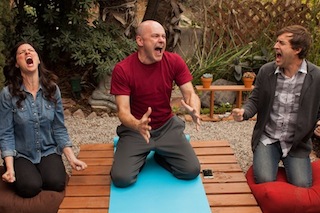 When director Ross Partridge and cinematographer Doug Emmett were in pre-production on their nine-episode web series Wedlock, they knew that a cinematic, shallow depth of field look would be essential to make their show stand out.

They also knew they’d need a highly mobile, lightweight camera package for stealthy shooting in practical locations, great low-light capabilities to control the size of their lighting package, and a broad choice of lenses to help maximize their creative options. Canon EOS C300 digital cinema cameras and cinema prime and zoom lenses fulfilled all their needs.

“We didn’t want Wedlock to look like video,” Emmett said. “We needed a really high-quality image that looked as cinematic as possible. That’s what we got with the combination of our three Canon EOS C300 cameras and Canon cinema lenses.”

Executive-produced by the indie-pioneering Duplass brothers, Wedlock is a comedy about a Type-A couple transitioning from friends to romantic partners and visiting a renowned therapist along the way. Like many indie films and webisodes, the series was independently financed and produced. “We took the ball into our own hands to see if we could produce it and then sell it to content providers or distributors,” Partridge explained. “We can package it and sell it as a series and then create a whole other season if we wish to.”

The production schedule was hectic. Wedlock was shot in a private residence in the Silver Lake section of Los Angeles over the course of four days. Emmett was happily surprised at how the camera operators needed no learning curve in their first use of Canon EOS C300 digital cinema cameras. “In a world in which digital cameras are used heavily in TV production, the jump to the EOS C300 camera was very easy,” he said. “In fact, it wasn’t much of a stretch for any of us, so that was exciting. I was impressed.”

On a tight schedule, the filmmakers had to be as efficient as possible in every aspect of production to avoid delays. “The form factor of the Canon EOS C300 cameras was very helpful in streamlining production,” Emmett said. “The compact size and light weight of the EOS C300 enabled our operators to set the cameras up themselves and pull their own focus. It’s also very easy to change lenses, which meant that we weren’t wasting time as we moved from set-up to set-up. We shot about eight and a half pages a day with three camera operators and two production assistants, so we were able to move fast.” 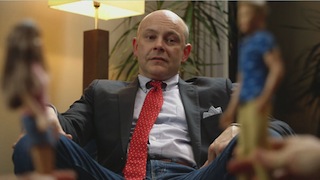 Emmett also appreciated the intuitive features and assignable buttons of the Canon EOS C300 digital cinema camera. These included a magnify function for checking focus and a built-in waveform monitor for checking exposure. “The camera’s form factor benefits the DP when the budget necessitates working with a smaller crew,” he said. “The Canon EOS C300 camera enables you to snap-in really quickly to get your focus. The built-in waveform monitors are also great, absolutely perfect for what we needed. The waveform acts almost as a little personal DIT [digital imaging technician] in the corner of your screen telling you if you’ve clipped any highlights or you’ve lost any shadows. So, for these reasons, we were able to work a lot faster without having to run back into the video tent and look at our images in a dark space.”

“I’m not saying we don’t need a gaffer anymore,” Emmett said. “But if you need to work quickly, it’s great to have all those tools at your fingertips because it provides one more level of reassurance. I was really happy to have these tools on the EOS C300 camera.”

Partridge also noted that at least some of the acting was improvisational, which made it ideal to have three Canon EOS C300 digital cinema cameras on-set. “Going back and trying to re-create things in improv can be really hard to do, but in scenes where the cameras were looking in one direction, capturing coverage from three EOS C300 cameras was key for us. The cameras are affordable and they record to CF cards, so we could have three cameras and just keep on shooting.”

The low-light capabilities of the Canon EOS C300 digital cinema cameras also delivered creative and production advantages for Wedlock, the filmmakers noted. The private residence in which they filmed was tucked away in a hillside, which limited the availability of light coming into the house. Fortunately, the Canon EOS C300 camera is equipped with the Emmy Award winning high-sensitivity Canon Super 35mm CMOS sensor, advanced Canon DIGIC DV III image processor, and a 50 Mbps 4:2:2 MPEG-2 codec for capture of full 1920 x 1080 HD at a selectable ISO range of up to 80,000 for outstanding low-light performance. 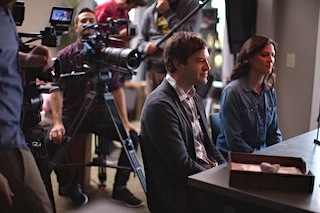 “I would never say that any camera is a replacement for using lights, but these new cameras are way more sensitive to light,” Emmett said. “That makes it easier when you’re in a smaller space and you need to use smaller lights, or if you don’t have the on-set power or a generator for the huge lights you’d typically use on a bigger movie. In this regard, the Canon EOS C300 camera is perfect because you can just crank up the ISO and you really can’t even see the difference. It’s quite remarkable now.”

“We were losing light all day long,” said Partridge. “The EOS C300 camera let us be resourceful. We didn’t have to saturate the set with light so much, which made us able to move quickly from set-up to set-up. It was nice that we didn’t have to make huge sacrifices and didn’t have to re-rig every 20 minutes.”

The low-light advantages of the EOS C300 digital cinema cameras used to shoot Wedlock were complemented by the fast Canon Cinema primes and zooms mounted on them. Two cameras were outfitted with zooms; the third, primes.

“The Canon Cinema primes are sharp and they open up wide, which is great, especially in low light,” he said. “They have nice fall-off, and they are consistent. The colors don’t shift between lenses.”

“I bought the Canon CN-E30-105mm T2.8 LS compact Cinema zoom when it first came out,” Emmett added. “I love it, it’s pretty lightweight and a real workhorse. I use it on every shoot I go on. It’s really a phenomenal lens. We also used the Canon CN-E14.5-60mm T2.6 LS Cinema zoom. They are really fast and easy to work with. I am always really impressed with Canon glass.”

“When you’re shooting single-camera style and you’re being very careful and specific about each frame that you’re setting up and composing, directors usually prefer primes because they allow you to ‘wrap your head’ around certain focal lengths,” he said. “But when speed is paramount, zooms can be faster for this style of production. We used both, and the Canon primes and zooms cut together really well, as we saw during color grading. The colors didn’t shift between lenses, and the footage all looked great, and that’s what’s really important.”

Emmett recorded all Wedlock footage in Canon Log Gamma, a setting that captures the full exposure latitude that the camera’s Super 35mm CMOS sensor is capable of delivering for film-style dynamic range between shadows and highlights. This is essential for achieving cinematic subtleties in color grading.

“The colorist was really impressed with how good it looked,” Emmett recalled. “We viewed the footage on a 2K projector and a 20-foot screen, and it looked unbelievably sharp.”

“Our editor cut the series in Final Cut Pro X,” added Partridge. “He said the workflow was quite seamless, he had no problems, and it went very fast. We were never waiting for footage to be uploaded. There were no problems with the workflow, which is always a relief.”

From production through post, Partridge and Emmett aimed to create a cinematic look despite their constrained budget and limited shoot days. Choosing the right cameras and lenses they overcame those challenges.

“Even a few years ago, there would have been no way to shoot this project on the budget we had and create the images we did,” said Emmett. “Now, with the Canon EOS C300 digital cinema cameras and the Canon Cinema lenses, we created a slick-looking, high-end series without breaking the bank.”

“I think we accomplished that,” agreed Partridge. “Everyone who’s seen Wedlock says consistently how expensive and top-end it looks, so we’re really, really happy.”